Jesse and Ricardo: Art in Tandem

An exploration of love, art, and bicycles. 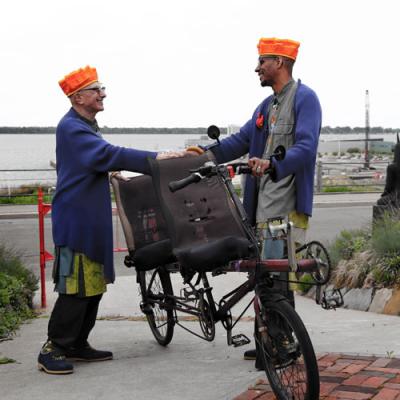 You may have spotted them on occasion — two men riding on a tandem bike and searching for treasure in the ordinary. They are Jesse and Ricardo, Erie artists collectively known as Art in Tandem.

On West Front Street, I stand in the upper floor of a building that smells like honeyed soap and newspapers. A black mannequin clothed in a tribal dress has a black baby doll strapped to the waist. The doll sings, "Joy, joy, joy," which sounds like sorrowful nuclear fission. The spray of static evokes a devolved society. The mannequin and baby doll make up an art piece titled "Chattel Number 5" and have traveled the country with the exhibition Hateful Things. They're back in Erie, along with their creators, who stand on either side of me, dressed identically in orange and green. The building is their shared home, their shared art, and their shared life, naturally titled the "Poetics of Space."

Adventurous travelers, artists, and scholars in several fields, Jesse and Ricardo do everything and go everywhere together – literally. Jesse is from Erie, and Ricardo is originally from New York City. His father, who may or may not have been related to Mussolini, moved the family to a hog farm in Ohio when Ricardo was a boy. For several years, Jesse and Ricardo have been able to support themselves as artists.

A dual self-portrait hangs from the ceiling of "Poetics of Space," each side representing one. The self-portraits have recognizable differences. On Ricardo's canvas, a disembodied female spectral hovers over a chair. A red heart is in stitches on the chair, either coming apart or being sewn back together. Jesse's canvas is divided: two chairs and two masks (the muses of tragedy and comedy). Remarkably, both portraits swim in bright primary reds and yellows, which reveals something important about Jesse and Ricardo's relationship. Although they come from different backgrounds and have different stories to tell, they essentially share a greater universe through their imagination, a vibrant sea evoking happiness because they have found each other. And evident in their home and gallery space, there are no boundaries between them.

"We're like the house," Jesse says. "It's visible for the world to see. We try to be very open. We can see the bay from every window. Even when sitting on the throne."

Locals may see Art in Tandem as a novelty, dressing alike because they are gay. But there are about four million adults in the United States who identify as being gay or lesbian, according to the Williams Institute on Sexual Orientation Law and Public Policy. Out of that four million, I will bet that only two people dress like Jesse and Ricardo – and that's Jesse and Ricardo. Lace fringe over green suede boots, khaki skirts layering khaki pants, knitted hats topped with spiraling towers — these are a few of the things I've seen them wear.

"It's been a bumpy road to try to educate people when the opportunity arises," Ricardo says. "We're doing an art piece with our wearing apparel, and it has nothing to do with being gay."

The elision was both gradual and instantaneous. Jesse, a sweet, shy 19-year-old met the older, assertive Ricardo, who took it upon himself to ensure that Jesse reached his greatest potential. He went with Jesse to every one of his undergraduate and then graduate classes at Gannon and Mercyhurst. Ricardo didn't want Jesse to be stereotyped and underestimated.

Ricardo was 16 when he started college. He didn't talk to anyone in his classes, and his friends were still in high school. Perhaps, attending Jesse's classes many years later was a way to relive a formative experience that he hadn't been present for, spiritually and emotionally. It was a way of doing something over and doing it right with purpose and meaning.

"I have learned more consideration and kindness from being around Jesse," Ricardo says. "And hopefully he's become more assertive being around me. We have grown together and adopted some of the styles that are innate within each of us. And I think that should be a good thing if you see something in the person you are with, that you are attracted to, something that maybe you wished was part of your personality. So in that way, I think we have flowed together."

One of the very interesting things I learn about Ricardo is that he came out in the black community, specifically in Cleveland during the '80s. "They were completely warm and loving," he says. "Everything I hadn't found in the white community."

Ricardo officially met Jesse at Erie's Blues and Jazz Festival at Frontier Park. Ricardo saw him standing and, characteristically, made the approach. They made a date to play tennis, and Jesse, characteristically, failed to keep the appointment. It wasn't the first time Ricardo had noticed Jesse.

At the time, Ricardo lived on Chestnut Street in the house that eventually became Art in Tandem's first space, "Crumbling to Perfection," which was featured on the show American Pickers. Jesse showed up at Ricardo's front door to apologize for the tennis no-show. He also happened to need a ride to work at a plastics factory, and Ricardo pulled out his spare bicycle.

After that first bike ride, they were together. Several days later, while Jesse and Ricardo were walking through the neighborhood, they saw an old red Western Flyer tandem bicycle. Art in Tandem was born.

It makes sense. Love, like a bicycle, can save you from loneliness. It can get you out of the house and make you see your city in a new way. It can lead you to discover the beauty of pavement and grass and the vivid colors of a building with more intimacy than if you were driving.

"You have to make your own way," Jesse says. "It's like there were no bicycle paths before we came along."

Of course, a bicycle can also lead to danger. You can get run over or stranded by a flat tire. Your bicycle can be stolen, which is what happened to Ricardo before he was with Jesse.

"One time I was about to go bike riding with a guy, and he was all for going for a bike ride, and I was getting the spare one out, and he just rolled off with my bike," Ricardo says. It was more than 20 years ago, but he still sounds a bit flabbergasted by the blatant theft. I would be, too.

"I looked for him because I knew where he hung out… and I approached him and asked for my bicycle, and he said he didn't have it anymore. He couldn't give it back… He said someone stole it from him. Well, if he left it outside or something like that, then someone would naturally steal it from him," Ricardo says.

He's talking about a long-lost bicycle, but his anecdote offers some choice lessons in modern love. Don't leave your bicycle outside, and don't leave it unlocked. Don't go riding with shady strangers who say one thing and do another. Don't give your bicycle to just anyone. And if you've found a fellow rider, a rare kindred spirit, who's going exactly where you're going at all times, best not to fight it and just ride tandem.

A snowy afternoon, I follow as they carry a long tapestry down a slippery hill. Twin orange patches in a white, icy world. They unfurl the tapestry to explain how it worked in their art piece, "River of deNile."

They're birds building a nest. One lays down a twig and his mate a leaf. On and on, one seeing this, the other seeing that, until the work is complete. There is always some give and take as arguments slip into negotiations.

Jesse gets a thrill from children's toys. Ricardo delights in anything off-the-wall.

They indulge in laughter as children no longer in need of parents.

They show me how I can grow here.

Hannah Choi Paul can be contacted at Hannah@ErieReader.com.