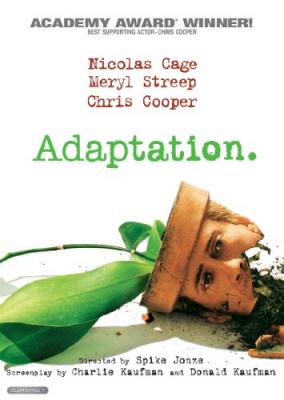 Check out the trailer: http://www.youtube.com/watch?v=0HtZ2M4e_AM

"The script I'm starting, it's about flowers.  Nobody's ever done a movie about flowers before.  So, so there are no guidelines."

"Adaptation." is just that.  An adaptation.  The writer of "Adaptation.," Charlie Kaufman, was contracted to write a script for the best-selling novel "The Orchid Thief" by Susan Orlean in 1994.  However, with a novel that lacks a movie-translatable narrative, Charlie suddenly hit a wall of writers block.

What follows is "Adaptation.," the ultimate chronicle of Kaufman's trials and tribulations of the creative process in the professional world.

Charlie Kaufman (Nicolas Cage) is a sad man.  Simply, he is unhappy in his life.  Depressed, socially inept, quickly losing his curly head of hair, putting on weight, and in the middle of a long relationship drought, Charlie attempts to distract himself from the problems in his life by immersing himself in "The Orchid Thief" script.

Charlie's brother Donald (also played by Nicolas Cage) is a joyful man.  Simply, he is happy in his life.  While Donald is similar to Charlie in appearance, he is much more proactive and positive in his approach to life.  Donald manages to maintain a relationship and lives an active social life, while also pursuing screenwriting as well, working on a psychological thriller.

Columbia Pictures has signed Charlie to pen the script for "The Orchid Thief", based on the novel of the same name written by Susan Orlean (Meryl Streep).  Fascinated by the novel, Charlie has a strong passion for Orlean's book, centered on her travels and time spent with master horticulturist, John Laroche (Chris Cooper).  Orlean's book seeks to discover how orchid enthusiasts develop their passion.

While Donald works on his own script, Charlie enlists his brother's aid on "The Orchid Thief" script.  Donald utilizes adopted lessons and rules of screenwriting that stick rigorously close to typical film structure.  On the other hand, Charlie avoids Donald's un-original convention, preferring to portray "The Orchard Thief" as close to the novel as possible, ignoring formulaic film structure.

Charlie and Donald are an equally entertaining and witty combination of characters representing opposite approaches to the creative process.  With Donald's help, Charlie seeks to not only complete "The Orchid Thief" script, but to also learn to appreciate his brother's optimistic approach to life.

Directed by Spike Jonze, "Adaptation." is another addition to his impressive filmography, including "Being John Malkovich" (1999) and "Where the Wild Things are" (2009).

Playing both the main character and co-star is no easy task.  But Cage puts on quite the performance of his career, portraying two polar opposite characters.

Since a majority of their scenes take place together, Cage was required to act alongside himself, exchanging dialogue with a different character he would eventually portray. His acting is phenomenal, the best of his career to date.

"Adaptation." is a fantastic story by screenwriter Charlie Kaufman.  The Academy Awards even recognized Charlie Kaufman and Donald Kaufman as duel screenwriters for "Adaptation.," making Donald the first fictitious person nominated for an Oscar.  Other recognition include Chris Cooper with Best Supporting Actor, and Cage and Meryl Streep receiving nominations.

- An in-depth look into the difficulties of writing a movie.

- Occasionally going back and forth in time can become confusing/annoying.