Tom Hardy is "Britain's Most Violent Prisoner" in this weeks review of "Bronson." 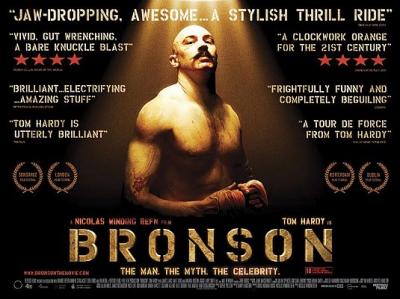 Check out the trailer: http://www.youtube.com/watch?v=KKC-FKGMeCY

Golden Globe winner and Star on the Hollywood Walk of Fame actor Charles Bronson is credited in 88 television and film roles.  Over the course of 53 years, Bronson became a critically acclaimed actor during the 70's and 80's. His relentless work ethic and dedication to his craft has engrained him in cinema and television history.

Bareknuckle boxer and psychotic criminal Michael Gordon Peterson is credited as "Britain's Most Violent Prisoner."  Over the course of 38 years and over 120 separate prisons, Peterson has become notorious for his fierce, animalistic aggression.  1977, Peterson changed his name to Charlie Bronson, known simply as "Bronson" by prisoners and guards of Britain's criminal justice system.

Idolizing the tough guy persona that actor Bronson routinely portrayed during the 70's and 80's, Peterson claimed the moniker "Bronson", and sticks to it this very day.

Ironically, there is little difference between the two Bronsons.  While actor Bronson achieved his fame through acting, prisoner Bronson's claim to fame has been earned through his giant fists.

Originally sentenced to 7 years for an armed robbery in 1974, Peterson channeled his violent aggression on prisoners. Bronson's violent behavior quickly doubles his sentence.  His non-stop fighting eventually accumulates into a life sentence.

"Bronson" is the semi-autobiographical account of Bronson's time scrapping his way through prisoners and ineffectively being reformed by Britain's criminal justice system as he searches for fame and notoriety as the ultimate bad ass.  Directed by Nicolas Winding Refn, and staring Tom Hardy as Bronson, "Bronson" is a dramatized chronicle of Britain's most violent prisoner.

With a shaved head, arms the size of cannons, and a grizzly mustache, Bronson (Tom Hardy) loves prison.  As a matter of fact, he prefers it to civilian life.  In prison, he can pummel whomever he wants— fellow prisoners, guards, faculty – everyone is a possible punching bag.  As Bronson states, "Prison is…Brilliant! I love it.  It is exciting, on-the-edge, madness at its very best."

While shortly on parole in 1977, Bronson became involved with underground, bare-knuckle boxing.  Within a brisk 69 days, Bronson had landed himself back into Britain's prison system, robbing a jewelry store.

"Bronson" is another character film directed by Nicolas Winding Refn.  After reviewing his fantastic film "Drive" last week, I felt inclined to see what his older work was like.  Unfortunately, "Bronson" is nowhere near as good as his later, more current work.

Although basing a film on the life of such a violent and intriguing prisoner seems like a great idea, there isn't much of a story in "Bronson."  Bronson himself is no more than an extremely violent and mentally disturbed man.  Essentially, his life has consisted of screaming at people, robbing people and punching people; the majority of it behind bars.

While "Bronson" does effectively portray his twisted mental state, Bronson is a boring guy.  Yeah, I get it –he beats people up.  That's about all there is to the title character of the film.  He has not accomplished anything nor made any significant changes in his life, which produces a flat and excruciatingly boring movie.

What truly ruins "Bronson" is the pacing.  At almost any point in time, the film could have simply ended.  There is no progression whatsoever.  At the conclusion of "Bronson," my first thought was "Wow, that was a long movie."  Ironically, it's pretty short at only 93 minutes.  But, boring things do seem to take forever.

The only way I was able to make it through to the end of "Bronson" was because of Tom Hardy's acting.  With lion-like roars, crazed emotions, and the meanest looking mustache I've ever seen, Hardy puts on a phenomenal performance.  However, without a real story, even the best acting in the world can't save "Bronson."