Sean William Scott boxes on the ice in this silent champion. 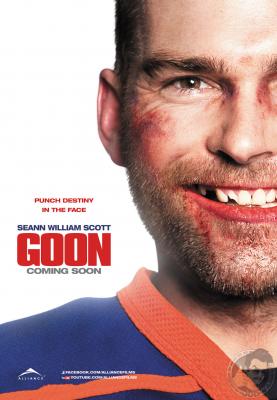 Check out the trailer: http://www.youtube.com/watch?v=sytVoTYFT08

You've probably never heard of it.  Maybe you happened to catch the trailer six months ago and thought, "That looks good…"  But, as things seem to go in Hollywood, only films with major studios and high profit potential get the full marketing treatment.  "Goon" is an ice cold slap shot, a badass hockey film.

"Goon" tells the knuckle pounding story of Doug Glatt (Seann William Scott), a lowly bouncer in Massachusetts.  Glatt is stuck in a rut, not happy with routinely tossing out patrons who've had too much to drink.  With a father and brother thriving in the medical field and his best friend Pat (Jay Baruchel) running a cable access sports program, Glatt is seeking a stronger purpose in life.

Glatt and Pat head to a local minor league hockey game to unwind and cheer on their hometown team, The Highlanders.  However, Pat gets rowdy and a player of the opposing team heads up into the stands to confront him.  Glatt instinctively jumps in and pummels the player in the stands.  The stadium erupts in applause.

The next day, Pat interviews Glatt on his sports show.  A caller dials into the program, the coach of The Highlanders, offering Glatt a chance to try out for the team.  Glatt quickly makes it onto the team for the sole purpose of being an "enforcer".

For those not familiar with hockey, an "enforcer" is essentially the meanest, toughest guy on the team.  A rugged player who's only job is to give and receive bareknuckle jabs and uppercuts to the face.  If an opponent hits his team's captain with a cheap shot, an "enforcer" will be sent out on the ice to even the score with his fists.  For a great example of an "enforcer", check out Rob Ray from The Buffalo Sabres: http://www.youtube.com/watch?v=aaum8lLJuJU

Glatt, now referred to as "The Thug", sets out to conquer the only real hurdle in the career of an "enforcer" – to knock out the meanest guy in the league, Xavier Laflamme (Marc-Andre Grondin).  What follows is a blood-spewing, tooth-removing clash of fight after fight as "The Thug" works his way towards a standoff with Laflamme.

Glatt must overcome drastic obstacles during his rise to the top of the list of tough guys.  With parents who don't support his career and a love interest that has a boyfriend, Glatt focuses all of his frustration into his art.  The art of shattering jaws and breaking noses.

Even for someone who tends to avoid films with a focus on a sport, I loved every second of "Goon".  We can all respect someone like "The Thug", who puts it all on the line for what he's fighting for, even if it happens to be fighting itself.

-          "The Thug" aka Sean William Scott is a great combination of grit and friendliness.

-          The gore and violence is pretty intense for a comedy, and may be unsavory to some audiences.