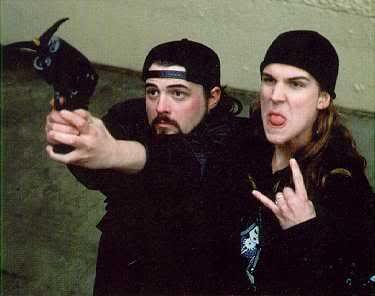 Check out the trailer: http://www.youtube.com/watch?v=_eVo7aBze1w

In the world of comedy film, there are two different people; those that enjoy Kevin Smith films, and those that despise them.  Some think Smith is revolutionizing comedy, while others find his work too obscure and self-absorbed.  The way I see it, if you find fellatio and fart jokes humorous, you are a Smith fan.  However, if his more recent films such as "Cop Out" or "Red State" have you questioning his work, take a look at one of his original films, "Mallrats," and I'm sure you will reevaluate your position on the unique brand of comedy that Smith is recognized for.

In Smith's cult classic "Mallrats," small town slackers T.S. Quint (Jeremy London) and his best friend Brodie Bruce (Jason Lee) are dumped by their girlfriends on the same day.  In order to cope with their shared breakups, the duo heads to the local mall for alleviation.

Upon arriving, T.S. and Brodie discover that Brandi Svenning (Claire Forlani), T.S.'s ex-girlfriend is volunteering on her Dad's game show, "Truth or Date," in the mall. Unless T.S. and Brodie intervene, Brandi will find a new boyfriend and T.S.'s chances of getting her back will be ruined.

To top it all off, Brodie finds out that his ex-girlfriend is already dating his archenemy, Shannon Hamilton (Ben Affleck), an employee at the mall who cannot stand T.S. and Brodie – calling them "Mallrats"— people who go to the mall without the intent to buy anything, just there to loiter around.

T.S. and Brodie enlist the aid of Jay (Jason Mewes) and Silent Bob (Kevin Smith) to sabotage the dating game show.  However, Jay and Silent Bob have to avoid the infamous mall security guard, LaFours (Sven-Ole Thorsen), who reportedly has already killed two shoplifters that year.

Jay and Silent Bob are my all-time favorite comedy duo.  I find their behavior and antics to be the stand-out performance in all of the Smith films.  Jay and Silent Bob were first introduced in Smith's first film, "Clerks", but their part in "Mallrats" is by far their funniest work.  Together, Jay and Silent Bob take their approach to mall entertainment to the extreme.  Everything from beating up the Easter Bunny, pretending to be Wolverine, and knocking out bad guys with "herbal" smoke.

Wearing their grungy dusters, heavy metal emblazoned clothing and work boots, Jay and Silent Bob devise scheme after scheme to bring down LaFour and the game show.  They are quite possibly the funniest characters in "Mallrats," and will keep you in stiches every time they are on screen.

T.S. and Brodie traverse the halls and stores of the mall in hopes of figuring out a way to get back their girlfriends.  Along the way, they encounter such things as topless fortune tellers, angst-riddled toddlers, the Easter Bunny, and an underage researcher studying the male libido.

"Mallrats" is a cult classic, and with good reason.  Unforgettable characters and incredibly witty dialogue (for a comedy) provides a unique, twisted and consistently funny film.  If you like comedies, be sure to check out "Mallrats," I'm sure you'll find yourself part of its cult following before you know it.

-          An entertaining story that most anyone can relate to; fighting for a lost relationship.

-          Excessive swearing and drug references may be off-putting to some audiences.