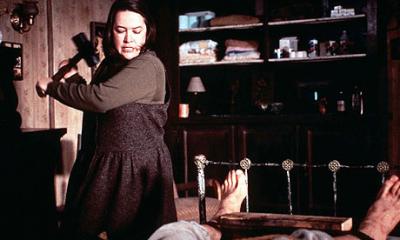 Check out the trailer: http://www.youtube.com/watch?v=NSXqDLm9hf0

Having a stalker would not be fun.  A pathological, obsessive creep prying into your life for whatever reason would be absolutely anything but a good time.  I think we can all agree on that.

Fortunately, the majority of us have never had to deal with such a type of person.  We live our lives in relative privacy and comfort, only hearing about stalkers in reference to celebrity's lives.

Uma Thurman had an estranged man send her playing cards with sexual graphics and threatening pictures drawn on them.  David Letterman's stalker routinely broke into his home and even stole one of his Porsches.  Jodie Foster's stalker went so far as to traveling to Washington, D.C. and attempted to murder President Reagan.   And no one can forget stalker Mark Chapman, who shot and killed John Lennon.  Chapman then read from A Catcher in the Rye until police came and took him away.

As disturbing as some of the above stalkers seem, they have nothing on Annie Wilkes – the psychotic stalker and number-one-fan of author Paul Sheldon in "Misery".

"Misery" presents the thrilling story of Paul Sheldon's horrifying winter spent under the "aid" of Wilkes after Sheldon accidentally crashes his car during a snowstorm.  Having just finished his most recent—and final novel in a murder-romance series—Wilkes asks to read it while she helps Sheldon recover from badly broken legs.

What follows is the terrifying unleashing of Wilkes' true, mentally-unstable personality.  Unhappy with Sheldon's novel, she demands he re-write the entire story.  Without any way to call for help or escape, Sheldon is forced to endure horrifying treatment as he puts together a novel that Wilkes approves of.

"Misery" is directed by Emmy Award winner and Golden Globe nominee Rob Reiner, known for such fantastic films as "Stand by Me," "A Few Good Men," and "The Bucket List".  With "Misery" taking place almost entirely in Wilkes home, Sheldon and Wilkes are two of the only characters on screen for the majority of the film.

Wilkes is played by Kathy Bates, whose performance as a deranged lunatic comes out of her as though Bates herself is a demented actress.  She is simply that good as a stalker.  Close ups of her crazed outbursts set to winter storm backdrops and lighting strikes will leave you griping your seat in suspense and anticipation as she becomes increasingly upset with Sheldon's writing.

Bates phenomenal portrayal of Wilkes landed her on the list of The American Film Institutes "100 Heroes and Villains", placing her at the 17th most iconic villain ever.  There is no question that Wilkes unforgettable scene involving a restrained Sheldon and a heavy steel sledgehammer will forever be engraved in thriller film history.

Sheldon is played by Emmy and Golden Globe nominee James Caan, iconic actor recognized for performance in "The Godfather" series, "Brian's Song," and "A Bridge Too Far."

Caan does an unbelievable job drawing us into the sick and twisted world of the prisoner he becomes under the supervision of Wilkes.  Having two badly broken legs, every time he attempts to make an escape, you can't help but squirm and wince in cue with his extreme pain.

Even after seeing "Misery" multiple times, I still found it difficult to watch some of the unbearably painful moments acted by Caan.  His realistic performance has you sympathizing with him throughout the film, his pain screaming at you through the screen.

"Misery" is the only film adaptation of a Stephen King novel that has won an Academy Award, with Bates being awarded an Oscar and Golden Globe for her shocking performance.

- The violence may be a lot to handle for younger audiences (A few scenes are VERY graphic in nature).