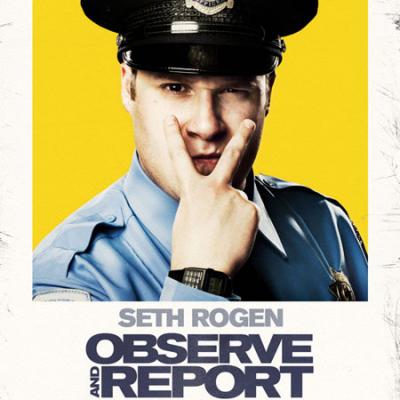 Check out the trailer: http://www.youtube.com/watch?v=ekAQzff95E8

In 2009, "Paul Blart: Mall Cop" unfortunately graced us with its presence in cinemas across the nation.  Paul Blart flooded the film market in early 2009, overshadowing other films released around the same time.  Movie posters and commercials for that ridiculous movie littered the market for the better part of a year.  If you saw it, I'm sorry.  If you haven't seen it, don't.

Lo and behold, I'm here to remind you that mall cops are indeed funny.  Although Paul Blart may have almost ruined all things related to mall cops for you, I have a film that will totally switch your mind.

It's hard to believe, but Blart wasn't the only security guard battling with mall menaces in 2009. "Observe and Report" came out roughly the same time "Paul Blart: Mall Cop" did.  The ironic thing is, they're both comedies centered on a mall cop, but "Observe and Report" is actually funny.

Jody Hill, creator of the hilarious HBO series "Eastbound and Down" directs "Observe and Report." Hill has worked on films such as "Knocked Up" and "Superbad," and is clearly no stranger to producing side splitting humor.  Notorious funny man Seth Rogen fills the lead role, joined by Anna Faris, Ray Liotta, Michael Pena, and Patton Oswalt.

Ronnie Barnhardt (Rogen) is a man of principle.  He lives at home with his alcoholic mother and is womanless.  He takes his job as the Head of Mall Security at Forest Ridge Mall very seriously.  So, when a vagrant flasher begins to expose himself to unsuspecting mall patrons walking to their cars, Barnhardt sets out to catch the deviant.

The unknown perpetrator eventually takes his actions inside the mall, flashing make-up clerk Brandi (Anna Faris).  Barnhardt has been head-over-heels in love with Brandi since he first began working at the mall, and finally has a chance to prove his worth to Brandi by catching the flasher.

Barnhardt assembles his squad of dopey security personnel to aid him in his capture of the flasher.  With the assistance of gangster-sidekick Dennis and the gun enthusiast Yuen twins (John Yuan and Matthew Yuan), Barnhardt dedicates himself to subduing the flasher before Detective Harrison (Ray Liotta) can take the credit.

Barnhardt tackles many obstacles during his quest to take down the mall flasher.  Armed with a taser and a flashlight, disgruntled mall workers, pesky skateboarders, therapists, and scantily dressed woman are no match for Barnhardt and his ceaseless sense of justice.

"Observe and Report" offers a lot more than the typical comedy.  The story and its characters create a non-stop entertaining time at the mall.  Comedian Aziz Ansari plays a salesman who is constantly accused of criminal activity by Barnhardt based solely on his race.  Additionally, Faris is absolutely hilarious as the drunken mall tramp, constantly complaining about having to doll-up older female customers.

The humor of Observe and Report is difficult to grasp.  The comedy is very dark.  Unfortunately, dark comedy is not for everyone, and some audiences will undoubtedly be turned away by this movie.  Barnhardt may act funny and say humorous lines, but his character– an overweight, mentally unstable mall cop who's failure to become a State Police Officer has left him living at home with his mother – isn't sunshine and rainbows.

"Observe and Report" is essentially the much better version of "Paul Blart: Mall Cop."  While "Paul Blart: Mall Cop" is a family-friendly PG comedy, the life of a mall security guard is simply not PG.  Being a mall cop is not a family-friendly profession.  The day-to-day dilemmas of a mall cop are most definitely rated R, and "Observe and Report" delivers them truthfully and hysterically.

-        Rogen is great as a dedicated elite mall security guard.

-        An innovative blend of dark humor and scatological comedy, which may be hard to get into at first.

-        Some viewers may not appreciate the strong language, nudity, violence, or drug use.