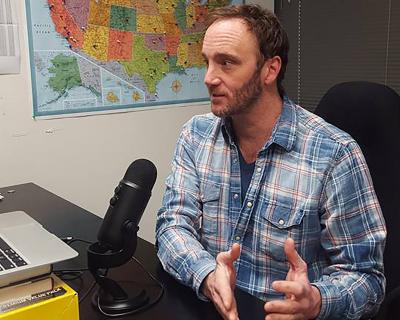 Jay Mohr is no stranger to Erie. A local favorite, the comedian has been performing stand-up for over 30 years. Fans have witnessed his career blossom, from a coveted position at Saturday Night Live in the early '90s to a supporting role in 1996's Jerry Maguire and a starting role in 1997's Picture Perfect. The performer has guest starred in over 50 television series, best noted for his roles as Professor Rick Payne on Ghost Whisperer, the titular Gary Brooks on Gary Unmarried, and most recently, a spot on Law and Order: Criminal Intent.

Mohr is also a storied author and radio host, contributed frequently to The Jim Rome Show before eventually transitioning to his own series, Jay Mohr Sports. Mohr also hosts a podcast titled Mohr Stories, originally a part of Kevin Smith's Smodcast Network and now a part of Mohr's own Fake Mustache Studios. But it all comes back to stand-up, where Mohr often delivers an array of dazzling, spot-on celebrity impressions, which notably include Eddie Vedder, Bruce Springsteen, Droopy Dog, Tracy Morgan, and Al Pacino amongst others. Comedy fans are quick to note that Mohr never delivers the same show twice, a trait that likely contributed to him being named one of Comedy Central's Top 100 Greatest Stand-Up Comics of All-Time. A recognizable, audience-friendly professional with a resume that runs the gamut, Jay Mohr's return to Jr.'s Last Laugh is bound to be one of the best comedy performances of the season. — Aaron Mook