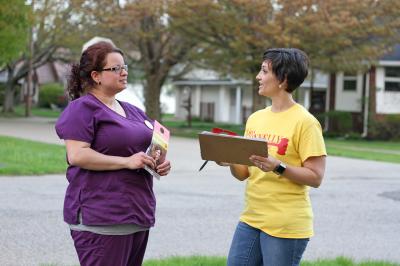 The primary election cometh. No, not yet the one featuring the return of Joe Biden to the political fray, or the one with "Mayor Pete" on the cover of Time with his husband Chasten, or the one that brought Tim Ryan to Erie on May 2, or the one with Kamala Harris, Bernie Sanders, Beto O'Rouke, Elizabeth Warren, Tulsi Gabbard, Kirsten Gillibrand, or Corey Booker. In numbers rivaling that of Baskin-Robbins, Democrats are vying to garner their party's nomination to go on to become the nation's 46th president.

Despite the overwhelming coverage, that election is still many months away, and before all of that, the municipal primary elections cometh for Erie, Pennsylvania on Tuesday, May 21.

While there are plenty of elections to pay attention to, the 2019 primary lacks a "big" race, likely to draw a higher voter turnout. And despite 2018's primary featuring higher billed races — governor, lieutenant governor, congressional bids — less than a quarter of the voting population took to the polls. Primary elections are funny like that: While we have a greater field of options, fewer of us seem to turn up to have a say, waiting until November to make decisions in greater numbers.

A race drawing some attention because of the candidates is the judgeship of the Court of Common Pleas. Five candidates are in the contest for two 10-year appointments on the nine-member local bench.

A benefit to this race is that candidates are permitted to cross-file, meaning that they appear on both the Democratic and Republican ballots. Members of both parties can select two of the five in the closed primary. Those top two for each ballot — where they may overlap — will head onto the general election.

Of note, Pennsylvania remains one of 14 states — others include Delaware, Florida, Kansas, Kentucky, Louisiana, Maine, Maryland, Nebraska, New Jersey, New Mexico, New York, Oregon, and Wyoming — to feature closed primary elections, in which registered voters may only vote for those in the party to which they are affiliated. While frustrating for Democrats who may want to vote for a Republican and vice versa, it's even more so for third-party voters, who cannot cast a ballot unless someone of their party makes a bid. And even then, they can only vote along party lines, largely lopped out of this round of decision making.

The judge race is an interesting one because it features names familiar to Erie voters. Both Ed Smith, who has a law firm in Erie and has been practicing law for 35 years, and Erin Connelly, a prosecutor in the Erie County District Attorney's Office for the past 16 years, sought a spot on the bench in 2015 but were unsuccessful in their bids.

Familiar, too, is Joe Sinnott, former Erie mayor, who left office in early Jan. 2018 because of term limits after successfully winning three elections for mayor, his second and third uncontested.

What makes the race — one to fill the seats left vacant by the death of Judge Robert A. Sambroak Jr. in March 2017 and the retirement of Judge John Garhart at the end of 2018 — interesting, too, is the impact of the Erie County Bar Association candidate evaluations. Comprised of a jury of their professional peers with 278 out of the association's 439 active members who returned their ballots, the Bar Association ranked two judge candidates as "highly recommended," one as "recommended," one as "not recommended," and one with no rating.

The highest ranking went to David Ridge, a lawyer for the past 33 years who owns his own practice in Erie, with 82 percent. Ridge also topped his opponents in competence (4.7), integrity (4.7), temperament (4.6), and experience (4.7) — all out of 5, and criteria the association's members vote on in addition to overall qualifications.

Behind Ridge is Smith with 58 percent in the "highly recommended" category, up from "recommended" during his last bid. Smith also followed Ridge at close second in each of the additional criteria: 4.4, 4.5, 4.4, and 4.2 for competence, integrity, temperament, and experience, respectively.

Pete Sala, a lawyer in private practice in Erie, received a "recommended," notching a 3.7, 4.1, 3.9, and 3.6 in competence, integrity, temperament, and experience, respectively.

The youngest candidate in the field at 41 to Smith's 60, Ridge's 59, Sinnott's 53 and Sala's 50, Connelly did not receive a rating. The non-rating is not a non-endorsement, per se; rather, it results because Connelly failed to yield more than 50 percent votes in categories: highly recommended, recommended, or not recommended.

Falling into the latter designation of "not recommended" is Sinnott. Ranking at 2.8, 3.5, 3.4, and 2.3 in competence, integrity, temperament, and experience, respectively, he was last in every category save for temperament where he scored 0.4 higher than Connelly.

The low numbers for Sinnott amongst his peers might be excused for the fact that he has not practiced law for the past 12 years, having governed in City Hall. The name recognition may work in his favor, as he's received more ink and film reel coverage than the other four combined, both good and bad.

But his peers think that experience doesn't translate to the seat to which he now seeks. It will be telling to see if voters think the same, potentially casting a decision for his judgeship based on his experience and tenure as mayor.

Another interesting race in Erie is the one for Erie City Council, where 11 Democrats are seeking a shot to emerge from the primaries and head to the general for three open seats, and lone Republican Shawn Lyon hopes to do the same. Why so many Dems and just one Republican? The city of Erie leans nearly 3-to-1 in Democratic voter registration edge, making the path to victory markedly more challenging for GOP candidates.

Of the seats, two are vacant: Sonya Arrington and Bob Merski. The other, currently held by Melvin Witherspoon, is up for grabs, as he seeks a third four-year term.

Merski vacated City Council after a successful campaign to take the Pennsylvania House of Representatives District 2 seat previously held by the late Rep. Flo Fabrizio, who had decided not to seek another term and had endorsed Merski in the race.

Arrington, first elected to council in 2015, decided not to run for re-election amidst federal prosecutors charges in 2018 that she used funds from Mothers Against Teen Violence, a nonprofit she founded, to gamble at Presque Isle Downs & Casino. She has pleaded not guilty and her case is pending.

The race for City Council is interesting for two reasons: The diversity in candidates seeking office, and that the Democratic Party of Erie County backed a slate of six candidates out of the 11 [for more information on that process, see Jim Wertz' op-ed in this issue]

Irrespective of the recommendations, the composition of council stands to change, even if Witherspoon retains his seat. With two new members — and Councilwomen Liz Allen and Kathy Schaaf both new to council, serving in their first terms — four of the council's seven faces are fresh (five if Witherspoon is ousted). What's more, if City Councilman Casmir Kwitowski wins his bid for City Treasurer, another vacancy would be created in January 2020.

Aside from the seat on the Court of Common Pleas and Erie City Council, plenty of other races feature notable contests. Amongst them, Erie County Council seats, where it's an "odd" voting year.

For District 1, Democrats Kim Clear, Veronica Rexford, and Terry Scutella look to face off against either Charles Foht or Robert Yates, Republicans, for the seat previously held by Kathy Fatica, who is not seeking re-election after serving out her late husband Phil Fatica's term.

District 5 Democratic incumbent Kyle Foust — who is also seeking a bid for County Controller against incumbent Republican Mary Schaaf, who is seeking her third term in the post — does not face primary opposition but will face a challenger in either Republican Joseph Cancilla or Brian Shank.

In District 7, Democrats William Driver and Rita Bishop square off to emerge against a Republican from the field of Jason Gibbs, Ellen Schauerman, Clayton Schulze, or Fred Wienecke, for the seat previously held by Republican Carol Loll, who is not seeking re-election after nearly 24 years of service.

Similar to Erie City Council, County Council will have fresh faces, at least two in Districts 1 and 7, more if Foust loses his council bid and/or wins his Controller bid and Leone loses to one of his challengers who will march from primary victory to the seat with no November challenger.

With Carl Anderson (District 4) and Scott R. Rastetter (District 6) both new to County Council with the previous election, at least four elected officials will be serving in their first term, maybe more.

But change can only come when candidates file and run for office, for either the first time or beyond if they continue to seek the opportunity to serve and have the support of their constituents; that's the first half.

The other is when voters do their homework, find candidates with policies and ideas they believe in, and then cast their ballots.

If only one-fifth of voters again show up to the polls, let us hope those who sit at home May 21 are fine with the decision of the few rather than the many for a lot of elections that affect a lot of local policy.