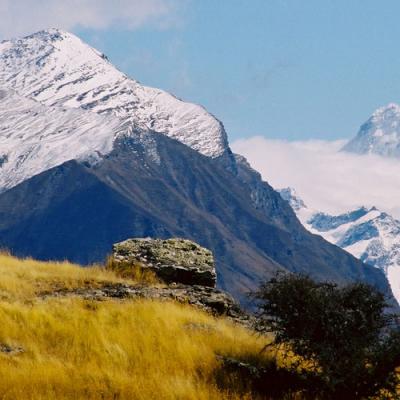 We're standing in a kitchen with the morning light streaming in. Big old wooden-framed windows look out on a small but entirely cultivated garden space, where a kitty appears before squeezing its chubby body in through the cat door.

This is the home of our Airbnb host, Jan, who has joined us this morning. Our three voices reverberate through the high-ceilinged, airy room, as we confess our shared dependency on bitingly dark coffee, and wait for its magic to develop inside a well-used French press.

Jan asks how long we plan to stay in the area, then suggests things to see in that personal, spontaneous way that makes me want to give Airbnb's creators a hug. I mention the brochure in our room for an organization dedicated to preserving the dawn chorus of songbirds, and Jan lights up, telling us proudly how successful they've been in reversing trends of endangerment.

Naturally, as so often happens in Airbnb exchanges, Jan asks about where we're from, too. We tell her we live on Lake Erie, in Pennsylvania, not far from Canada (we find ourselves stressing the Canada proximity a little more emphatically, on this post-inauguration trip). Then we describe Presque Isle – its enchanting loveliness, its phenomenal avian diversity, and its importance in migration.

I bring up websites on the phone to show Jan Presque Isle's sensuous shape, and a few photos of the hundreds of bird species that have relied on its sanctuary.

Jan beams. "You live near this place?" she asks in amazement. "Oh, I would love to see it!"

By now, I've represented the peninsula so ravishingly that I'd love to see it, too.

But here's the kicker: Jan's house is on the South Island of New Zealand. Like, the New Zealand. That place internationally renowned for some of the most hyperbole-inspiring, gorgeously unspoiled, gloriously dramatic scenery in the world.

And it's entirely deserving of this reputation. Turquoise glacial lakes and rivers, skyscraper waterfalls, glaciers among pristine snowcapped peaks, lushly verdant rain forests where plants grow out of plants growing upon plants, blond grasses shimmering on hillsides, and seas crashing into the islands' edges as if they're aching to come ashore.

This encounter holds new meaning as I read a March 10 report in the Erie Times-News about how local conservation projects "could be in jeopardy if budget cuts proposed by the Trump administration are approved. They call for slashing the $300 million Great Lakes Restoration Initiative budget to $10 million as part of a proposed 17 percent cut to the National Oceanic and Atmospheric Administration budget."

I can't help but think of the South Island: wild, unbridled, and largely protected by joint efforts between conservation officials, lawmakers, and citizens who wisely recognize their landscape as invaluable.

Later in our New Zealand trip, we're staying with Lesley, near the Southern Alps. She tells us about her years of working in Antarctica, struggling to find the words to depict such singular beauty. She's also lived elsewhere abroad, but clearly prefers her phemonenal island.

Lesley recommends a visit to Castle Hill, sacred to the Maori and deemed a "Spiritual Center of the Universe" by the Dalai Lama. She highlights its enormous slate-colored boulders against glowing grassy hills, its mythic presence, and how Narnia was filmed nearby.

We tell her we live near Lake Erie: our part of a network that provides 20 percent of the earth's surface fresh water. We try to verbalize what it feels like to witness such humbling power from the shore of our own spiritual center.

"I can't believe this is where I live!" she says excitedly. Then asks about our homeland.

We tell her we live near Lake Erie, the shallowest of the Great Lakes, and thus dazzlingly affected by the tumult of wild storms. We describe standing on the cliff overlooking our part of a network that provides 20 percent of the earth's surface fresh water. We try to verbalize what it feels like to witness such humbling power from the shore of our own spiritual center.

"Ooh!" Lesley exclaims. "That must be so amazing! How lucky that you live near there."

Let's let our representatives know that we'd like to keep it that way.