"She has quite the vocabulary for a barmaid." 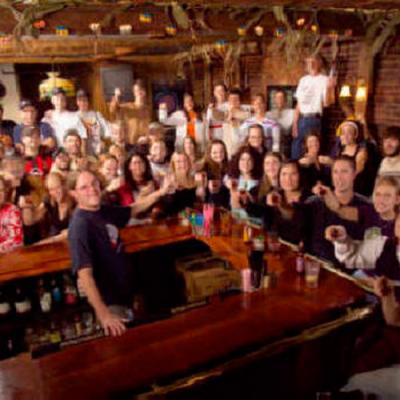 During the second half of my twenties, I tended bar at The Plymouth Tavern, the State Street "Cheers of Erie" primarily frequented by respectful, easygoing regulars.

But one evening I waited on a couple out-of-towners: contract engineers fulfilling a stint at GE. We were engaged in typical happy hour banter, when I used the decidedly unremarkable word "astute." As I stepped aside to wait on an always-polite regular, I heard the taller engineer remark to his cohort, "She has quite the vocabulary for a barmaid."

A few years later, his words became the title for my graduate Sociolinguistics paper about the presumptive way people often address service industry workers: as a bunch of dumb, stuck, ignorant losers incapable of anything else.

On another evening, a customer chided my smiling contentment. "What could you possibly have to be happy about?" he asked. I'd just returned from a dream trip to Alaska, but I doubt that would've convinced him that a "barmaid's" life could be anything but desperate.

I've often thought we should reinstate the draft in this country. Not into the armed services; into the service industry. Surely the battle to raise the minimum wage would've been won years ago. And perpetual inequalities would be harder to ignore if the "haves" spent a year washing dishes with the "have nots."

Today, my former coworkers have acquired their own businesses, graduate degrees, leadership positions, and all the trappings of American "success."

But that shouldn't matter. As Dave Barry said, "A person who is nice to you, but rude to the waiter, is not a nice person." Nor is a person who bases whether or not you're worthy of respect on what you do for a living.

Now people of all ages are being laid off and forced to enter the service sector. If anything good is to come of this systemic extinction of financial security, it'll be the humble awareness, finally, that the only ethical way to treat others — all others — is with kindness.