Stop by for a spell and enjoy the action 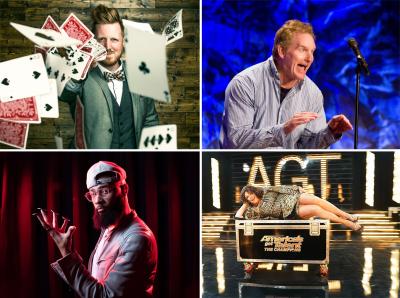 Kellar's — a Modern Magic and Comedy Club at 1402 State St. (just a block away from where the Real Wizard of Oz's Gem City childhood home once stood) — beckons us in for an August lineup that's sure to astound and mesmerize audiences with feats of magic, and kill them ... with laughs.

Here's a quick run-down of who's appearing (and reappearing) at Kellar's this month:

As seen on the CW's hit show Penn & Teller: Fool Us and on YouTube clips with hits in the millions, magician/storyteller/redhead John Hinton uses his unique style (and some modern tech) to transport audiences mere inches away from the mysteries in his act. There's magic to behold, stories to be heard, and joy to be had.

To say Greg Hahn is absurdly energetic is to pay the man a compliment: His hyperactive approach to stand-up comedy has landed him plenty of spots on the national hit Bob and Tom Radio Show, as well as gigs on Late Night with Conan O'Brien, Comedy Central, CBS, ABC, FOX, MTV and CMT. If high energy, expert crowd work, physical humor, and one-line zingers are your kind of thing, then Hahn could be your kind of comedian.

Eric Jones' insane sleight-of-hand skills and spellbinding illusions have placed him in good company: He's been showcased on Comedy Central, at the world-famous Magic Castle in Hollywood, and in New York City's legendary Monday Night Magic series, not to mention on Penn & Teller: Fool Us, America's Got Talent, and on TV programs in nearly 20 different countries. Anyone who can appreciate the magical power of manual dexterity should not sleep on this one.

"I think you just came up with your own sitcom. You're wonderful. I love you"

"I think you're the best comedian we've had on this show."

That's what Mandel's buddy, Simon Cowell, said about her.

A fan favorite and top 10 finalist on Season 13 of AGT, Barbolak has also been featured on AGT's "Champions" series, as well as the Britain's Got Talent "Champions."

Now, folks, these are all 21-plus shows, so leave the little imps at home. For more information about this month's talent lineup, tickets, and everything else happening at Kellar's, visit www.kellarsmagic.com. — Ryan Smith