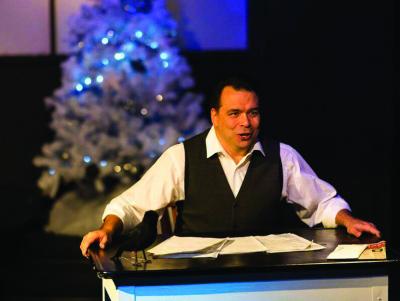 It's a Wonderful Life is about second chances. Sometimes these come after a dark, personal turning point on a bridge, and sometimes they come after a well-received local theatre run — they don't always have to be a bad thing, now do they? This year, Ken Falkenhagen returns with his one-man interpretation of the quintessential holiday film, This Wonderful Life, which graced the Performing Arts Collective Alliance (PACA) stage in 2016. Showcasing his humor and versatility, Falkenhagen inhabits the dozens of characters that appear in the film. He bounces around in a highly entertaining retelling of the story, adding his own observations about the film's quirks, foibles, and unforgettable moments.

People never thought that It's a Wonderful Life was going to be a hit. In fact, it really wasn't. The 1946 Frank Capra film actually lost over a half a million dollars at the box office, and was regarded as mostly forgettable "Capra-corn" for its overt sentimentality and moral messaging. It wasn't until decades later, when a clerical error from the National Telefilm Associates failed to renew the film's copyright, sending it into the public domain in 1974. For the next 20 years, it was nearly inescapable on network television during the holidays. For anyone who grew up in front of a television during those times, it became an indelible part of their lives — young and old (since the mid '90s NBC has held the exclusive broadcasting rights to the film). Falkenhagen is certainly one of these people, and it's very clear that the film holds a warm place in the actor's heart. There's a certain indescribable magic about the movie that will continue to remain special to people for decades more to follow. And don't forget, PACA is BYOB, so bring your mulled wine, heavy on the cinnamon, and light on the cloves. — Nick Warren