Kick! Punch! It's All in the Mind!: The Art of Self Defense is as Twisted as It is Funny 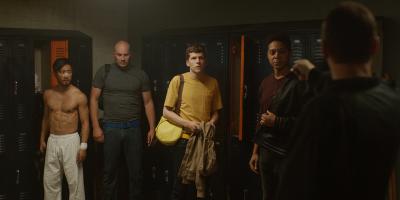 I've frequently referred to action movies as "violent male power fantasies." I'm not using that term derogatorily, as it's important for movies to offer an escapist fantasy for their audience and there are few forms of escapism more enjoyable than watching characters (usually men) beat the ever-loving crap out of people who deserve to get the ever-loving crap beaten out of them. However, most people never really think of the implications of that mindset. The new film The Art of Self Defense takes the appeal of hyper-masculinity and deconstructs it in some hilarious and terrifying ways. The result is like The Karate Kid by way of Yorgos Lanthimos disguised as a Wes Anderson film. It's truly unlike anything else playing in theaters.

The movie stars Jesse Eisenberg as Casey, a timid and neurotic man who is attacked one night by a motorcycle gang. Hoping to learn to defend himself, Casey enrolls in a local karate school overseen by a sadistic sensei (Alessandro Nivola). As his karate skills improve, Casey learns that the school's "night classes" engage in practices far darker than he was ever expecting.

The film has a biting deadpan wit that can go from funny to dramatic to horrifying, sometimes within the same scene. It also makes a terrific statement about the extremes some men will go to when masculinity is put in a very confining box. When there is a limited definition of what it means to "be a man," the drive to fit that definition could lead men down a very damaging path. The Art of Self Defense addresses this very serious issue without ever losing its twisted sense of humor. — Forest Taylor

The Art of Self Defense