Lady of the Manor: Greta Gerwig's Lady Bird has the Guts to be Ordinary

I loved nearly every scene of Greta Gerwig's Lady Bird. 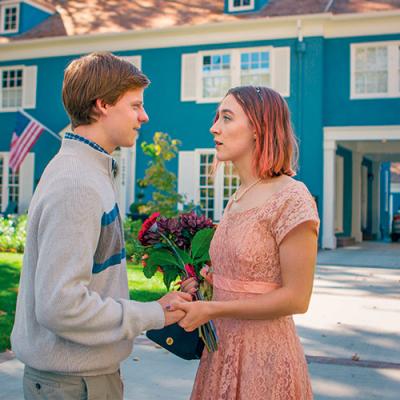 Greta Gerwig's (Frances Ha, Mistress America) directorial debut Lady Bird is a difficult film to write about. I loved nearly every scene in it, but I can't really describe why without just describing the entire film. The film effortlessly displays a kind of familiarity and relatability that is often all too lacking in movies.

The film, set in 2002-03, follows Christine "Lady Bird" McPherson (Saoirse Ronan), a senior in a Catholic school who's hoping to escape from her dull life in Sacramento and get into a hip, East Coast college. The only problem is that her grades aren't anything special and her parents have recently come under hard financial times. There aren't any big emotional moments or sudden tragic turns in the film, but it's fascinating because it manages to be so ordinary. The characters and their dilemmas were so relatable that every conflict manages to be both funny and heartbreaking in equal measure. In a lot of ways, it could almost be seen as a prequel to Frances Ha (which Gerwig both starred in and co-wrote) because it deals with the same conundrum — people who know what they want but don't quite know how to get it.

Lady Bird works equally as a coming-of-age story, a love letter to a city, and a nostalgia piece for those who remember that strange time when the easygoing '90s were slowly morphing into the moralistic 2000s. If you're interested in simple yet deeply empathetic stories with great acting and some genuine heart, then this is the film for you.