Fancy yourself a fanatic for fanfare? 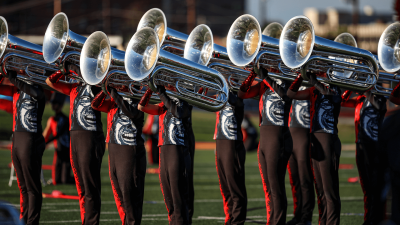 If there is one thing that anyone who has been part of a marching organization knows how to handle — it's adaptation.

When the event organizers for the Lake Erie Fanfare realized they would not have the use of Veteran's Stadium on July 26th — the home of the summertime DCI competition for as many years as anyone can remember — they knew they would have to switch gears. As they say, the show must go on.

In case you haven't heard, in June it was reported that Vet's Stadium would be closed down for renovations, and late July is precisely the same time that the popular drum and bugle corps competition is normally held in that location. This meant that the enormous event would have to be moved elsewhere — but where?

"We had many concerns about relocating — just finding another site, concerns about the group and spectator parking, with 40-plus coach buses, 20 tractor trailers and more, plus the hundreds of cars," Ray Luniewski, co-chairman of the Lake Erie Fanfare, said. "As well as the obvious — would the crowd follow us?"

Luniewski confided, "We tried a couple other sites closer to Erie, but they wouldn't allow us to use their facility. Edinboro turned out to be the perfect fit."

Edinboro University of Pennsylvania, whose Sox Harrison Stadium lies in the northeast corner of the campus, will now host the trucks, trailers, buses and throngs of music fans. If a one-time change of venue isn't necessarily ideal, it is incredibly reassuring that the stadium, and the good people at EUP, are used to holding large sporting events and can easily manage the crowds.

Luniewski is hopeful the alteration in scenery won't have any adverse effects on attendance. "It seems that any change we endure affects the crowd in some fashion — we just hope that it is minimal and possibly it may unlock the door to new patrons who've never been to our show before."

Have you ever wanted to hear Simon and Garfunkel ("Bridge Over Troubled Water" by The Cadets), Danny Elfman (selections from Edward Scissorhands by Pacific Crest), or Bon Iver ("715 - CR∑∑KS" by the Madison Scouts) performed by a full brass section, showcasing huge sounds and visually breathtaking formations? Now is your chance. You might even get Rick-rolled by Seattle Cascades.

For new patrons: Drum and bugle corps is like marching band, but imbued with world-class pageantry and performance. Members, who play brass or percussion instruments or perform in the color guard, are all under the age of 21 (some are still in high school), and they represent the very best of young people today, displaying athleticism, musicianship, discipline, hard work and a commitment to excellence. Oh, and they do it in scorching summer heat, while traveling across the country, sleeping on gym floors and working their tails off for hours every day.

So there it is: the door has been unlocked. Come on down to Edinboro, step through the gates to the stands of Sox Harrison, and see what you've been missing. — Cara Suppa

by Nick Warren9 hours ago
A Q&A with the iconic author, New Yorker, and cultural jukebox prior to Oct. 6 MIAC date