What can be done to protect our most precious natural resource? 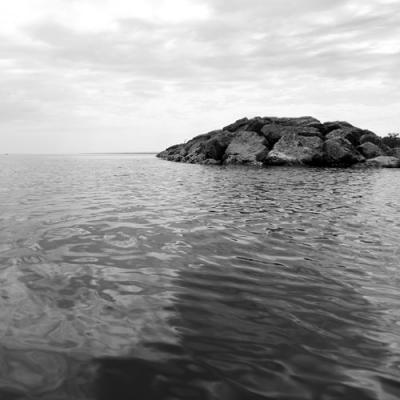 Nor any drop to drink.

~ Coleridge, The Rime of the Ancient Mariner

In the memory, I'm floating in endless, uncluttered space. Water. Incomprehensibly vast, as far as I can see. I sit on its surface in a big rasta-hat-colored hunk of polyethylene, awestruck still for a moment. Here. Now. Finally.

I've reached the middle of Lake Erie in my kayak. The generous curve of planet earth clears my horizons for miles around. I see no land, no industry, no traffic. I hear no debates about what to build, or who will profit.

And finally, possessed by this lake, I understand implicitly what that whole "Great" thing is about.

I've spent many hours on that water over the years, raining petty worries into this enormous, absorbing, life-giving resource. In my wanderlust, I long for redrock canyons, foreign mountains, and acres of sagebrushed desert. Erie offers none of these. But that lake. What a stop-in-your-tracks portal to the present. What a catalyst for contemplation. What a constant, precious gift.

Lake Erie nourishes countless visitors from myriad species each year, including our own. This water determines our survival. Our lake is the source of drinking water for 11 million people, and the source of sanity for even more.

No wonder it felt insane, then, when in August 2014, Toledo, Ohio residents suddenly couldn't drink their water. Toledo?! It sits at the western end of the same body of water I can see from our street. And now Toledo couldn't make use of this incredible source of sustenance and comfort?

The New York Times reported last August that "It took a serendipitous slug of toxins and the loss of drinking water for a half-million residents to bring home what scientists and government officials in this part of the country have been saying for years: Lake Erie is in trouble, and getting worse by the year."

The Times added, "Flooded by tides of phosphorus washed from fertilized farms, cattle feedlots, and leaky septic systems, the most intensely developed of the Great Lakes is increasingly being choked each summer by thick mats of algae, much of it poisonous."

Terrance Heath of Campaign for America's Future elucidated the causes of what he calls "The 'Perfect Storm' Behind Toledo's Toxic Tap Water": "Agriculture and fertilizer are big businesses, involving big profits. Some of those profits are spent on lobbying against federal legislation and on campaign contributions to lawmakers who can be counted on to oppose federal regulation of the industry." 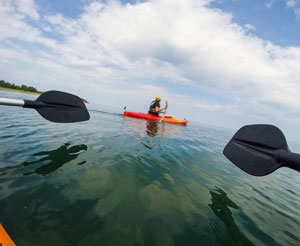 In this fifth year of "democracy" under Citizens United, it's no secret that corporate control of our elections is epidemic. During the Court's ruling on the case, Supreme Court Justice Stevens dissented, writing, "A democracy cannot function effectively when its constituent members believe laws are being bought and sold."

Whether we believe it or not, the proof is in the genetically modified pudding.

"Monsanto is a major client of the Fertilizer Institute, the lobbying arm of the fertilizer industry and agricultural interests that oppose efforts to restore some of the Clean Water Act's authority."

That Act, passed in 1972, helped return polluted and flatlining Lake Erie to vitality by the late 1990s. But as Heath explains, "The Act was designed to regulate pollution from fixed points, like industrial outflows and sewer pipes. Today's agricultural pollution is spread out over thousands of miles." The Act's power has been further undermined repeatedly at the federal and state levels, leaving phosphorus pollution from various sources largely unregulated.

Locally, PA Sea Grant and the PA Department of Environmental Protection are keeping a close eye on Harmful Algal Blooms (HABs). According to PA Sea Grant, "many of these blooms may produce poisons (or toxins) … Humans, pets, livestock and wildlife that come into contact with, or ingest HAB toxins can experience sickness, paralysis or even death." PA Sea Grant encourages residents to report blooms observed to the PA DEP at 814-332-6839.

Marti Martz, Senior Outreach Specialist at PA Sea Grant, offered direct practical advice for homeowners to help mitigate HABs locally. "Have your soil tested," she advised. "That way you know if your lawn requires fertilizer and how much phosphorus and nitrogen you should be applying. Excess fertilizer wastes money and adds unnecessary nutrients to the environment. Excess fertilizer applied by farmers, lawn companies and property owners is a big part of the HABs issue. Don't fertilize before it rains. Fertilizer is water soluble and will run off in heavy rain." She recommended seeking more information via a lawns-to-lakes program at www.lawntolake.org.

"Also important for homeowners," added Martz, "is to clean up after pets. Pet waste in your yard breaks down and can end up in the nearest body of water. Choosing phosphorous free cleaning products is another way to cut down on the amount of unnecessary nutrients in our waste water (which ends up in the lake)."

Microcystin poisoned Toledo's water, about 182 miles across our shared lake from Erie. While it's thrilling to imagine what Erie's Bayfront might become in the wake of creative development, what's the point of a pretty waterfront if you can't even drink the water?

Unbridled corporate power threatens our health, our future, our food, our water, and our security.

We need to reframe the discussion. And as long as message-monopolizing corporations — like Monsanto — stand to benefit from our ignorance about the potential safety of our food and water, it's up to us to keep our priorities straight.

This is not simply an environmentalist's pedestrian plea for us to save our species, though it is that, in part. Unbridled corporate power threatens our health, our future, our food, our water, and our security. And international maneuvering among Big Ag conglomerates like Monsanto creates bitter resentment toward U.S.-branded globalism.

So I am an environmentalist. Yes. But first, I am an American who grew up devouring the ideologies of Jeffersonian independence, Emersonian self-reliance, Thoreauvian Civil Disobedience, and the Whitman-esque celebration of the possibilities of true democracy.

At 18, voting for the first time, I felt like I later would in my kayak. Free. Humbled. Awestruck by present possibility. Suddenly, I had a say in this collective American Dream. My country cared enough to let us decide. Even we women, eventually. And now I honored those who'd earned this voice for me.

I vowed not to squander my participation in this glorious democracy I was lucky enough to be born into. I saw it as my duty to keep aware of the decisions being made by my representatives on my behalf. I was a moony teenager in love with democracy. But sometimes, love is blindness.

As the years wore on and the veil was lifted, I've seen that democracy is a theory, not a practice. Too many lawmakers are chummy with lobbyists. Too many elections are purchased outright by superpacs. And as long we hand over our power to corporate monoliths — even our right to clean water, air, and food — none of us is truly free.

We all deserve clean water to drink, and enjoy, and the right to choose what foods become our cells. But it seems we're hungry for more than that.

As the wonderfully courageous, longtime food activist Frances Moore Lappé said, "Hunger is not caused by a scarcity of food but a scarcity of democracy."

I am hungry for the America I thought I lived in. Hungry for an empowered citizenry who sees that these enormous corporations — like our government — get their power from us. And that if we stopped buying their fertilizers, pesticides, and Roundup, stopped eating their industrially-grown food, stopped being duped into overconsumption by their advertising, and stopped voting for the representatives more interested in corporate rights than human rights, we'd end their stranglehold on our freedom.