Getting to know the growing water sport 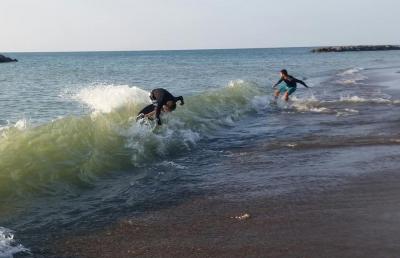 It's five o'clock on a Friday evening, and Doug Cardo can't stop looking out his office window. For the past several hours, storm clouds have been brewing over Lake Erie, creeping southeast toward Presque Isle State Park. It's mid-October, and Cardo knows that the usual throngs of sunscreen-deniers and selfie-admirers have long packed up for the season, leaving behind nearly five miles of uninterrupted shoreline. He sends one last e-mail, grabs his phone and car keys, and eagerly heads towards the exit.

From his office at Finish Thompson, Inc., where he works as a mechanical engineer, Cardo hangs a left onto West Eighth Street toward Peninsula Drive. He pulls up to the beach where his brothers-in-law, Jason Traut and Mat Silva, are anxiously waiting for him. They change into their gear and head for the waves, which are now breaking harder and closer to shore as the storm front closes in. With a knowing nod, each of them agrees: the conditions are perfect for skimboarding.

Since their teens, Cardo, Traut and Silva have excelled at recreational and extreme sports, taking up skateboarding, snowboarding, surfing, kiteboarding and rock climbing virtually before high school. Cardo was particularly talented on the soccer field, regularly finding the back of the net while playing for Lake Erie Soccer Club (LESC). Now in his mid-30s, Cardo has helped to form a new "LESC" — the Lake Erie Skimboarding Community — together with Traut, now a professional coffee roaster, and Silva, a software developer.

In Erie, skimboarding is a small but growing subculture. Although technically Cardo, Traut and Silva started LESC together, Traut was easily the first of the group to try skimboarding. Over 20 years ago, he handcrafted his own board from an ordinary sheet of plywood. After rediscovering the dilapidated board in his closet a few years ago, Traut invited Cardo and Silva for a skim on the shorebreaks of Presque Isle. They were instantly hooked.

Like surfing, skimboarding was first developed by native Hawaiians, who used short wooden planks called paipos to glide on crashed waves. Unlike surfing, however, skimboarding relies on a "floating" effect generated by tiny water vortices sandwiched between a flat, oval-shaped skimboard and compacted wet sand. By getting a running start, slapping down a board, and balancing carefully on a receding wave, skimboarders can hydroplane for up to 30 feet along the shoreline. The aim is to skim into a wave just before it breaks, then ride it all the way back to shore. 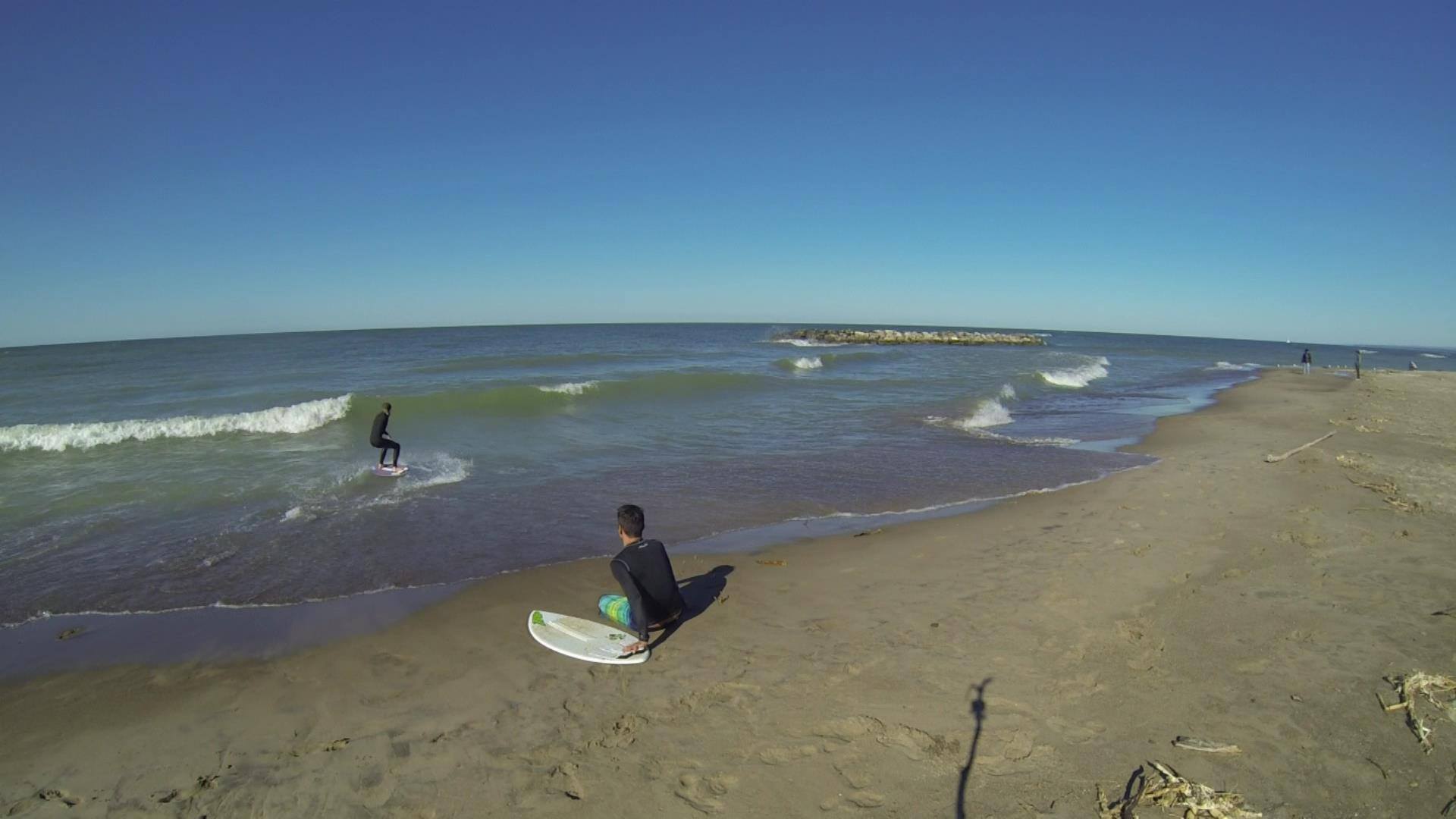 Skimboarders use tiny water vortices between flat, ovular boards and wet, compacted sand to glide along receding waves for distances up to 30 feet. The Lake Erie Skimboarding Community (LESC) shares their passion for this exciting pastime on social media and at Presque Isle beaches.

Like any extreme sport, skimboarding obviously requires some athleticism, and participants must be aware of a few risks. Cardo is quick to highlight some unique aspects of skimming on Presque Isle State Park beaches. For starters, "toxic algae blooms, enormous driftwood logs, and floating debris" can cause a crisis in the water, Cardo explains. On shore, gravelly sand can also ruin a good skim.

Aside from those hazards, Presque Isle State Park regulations can sometimes cause a headache. Currently, surfing (which often gets lumped together with skimming) is only allowed at designated areas on Beach 1, 10, & 11. According to LESC, these beaches provide some of the least favorable conditions for skimming. Moreover, Park rules prohibit entering the water above your knees if lifeguards aren't present. (On occasion, however, some lifeguards make an exception for skimboarding, considering it a "below the knees" activity.)

LESC is hopeful that the Park and lifeguards will designate more "surf-safe" areas along Presque Isle, or explicitly allow skimboarding throughout the entire park. The group recently launched a Lake Erie Skimboarding Community Facebook page, and is always welcoming new members/visitors. Cardo notes that skimming is a fairly inexpensive hobby, too, with basic boards selling for about $40 a pop. With the right attitude and strong core muscles, pretty much anyone can skim.

So the next time you see a storm brewing over Lake Erie, remember that every dark cloud has a silver lining. Grab your keys, shake the sand from your gear, and head to Presque Isle. The conditions are likely perfect for skimming.