There are invaders lurking below the surface, threatening our recreation, our fishing industry... 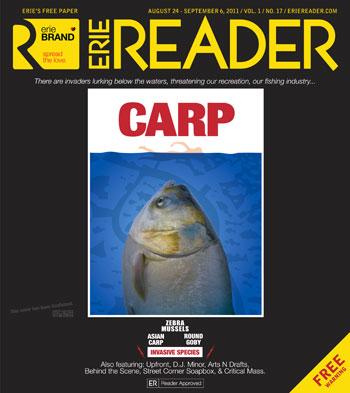 A pouty-lipped, four-foot-long muskellunge lurks sinisterly at the bottom of the bay, telling horror stories to the young fry who have yet to encounter an angler's hook. A non-native, parasitic sea lamprey – it looks like an eel, but has a suction-cup-like mouth with concentric circles of sharp teeth – latches onto an unassuming smallmouth bass and begins to suck its blood. (Take that, Twilight.)

There's so much action going on underwater you have to stop yourself from snapping your fingers and letting out an "Oh, no, you didn't!"

You drive by it every day on the Bayfront Highway. You pay big money to rent a room at the Sheraton Hotel where you can see it from your window. But how much do you know about what's underneath Lake Erie – its fish? And, perhaps more importantly, how non-native species could change Lake Erie in the future?

Lake Erie by the Numbers

Since Lake Erie is shallower, it tends to be warmer, and that makes our Great Lake a fine location for biodiversity. The warm waters serve as a prime locale for algae to grow, and algae acts as the basis of a "food web," said Greg Andraso, Ph.D., a Cooney-Jackman endowed professor of biology at Gannon University. Algae serves as food for small crustaceans and fish; medium-sized fish snack on those; and so on, as you (hopefully) learned in biology class.

Lake Erie is home to some big lunkers, too. The Pennsylvania Fish and Boat Commission reports three state-record catches pulled from our lake: a 28-pound, 6 oz. Chinook salmon caught in 1990; a 15-pound, 5 oz. coho salmon caught in 1985; and a 27-pound, 13 oz. lake trout caught in 1996. The state records bump up to four if you count Pennsylvania's largest yellow perch caught in Presque Isle Bay, tipping the scales at 2 pounds, 11 oz., in 2010.

But if you're out to nab any of these prized catches, you'll need more than a hook and some hope – you'll need the right bait.

What are they biting on?

"We sell everything," said Lynne Rudzinski of East End Angler, 4702 East Lake Road in Harborcreek. A bait shop is a buffet for filets-to-be, with salmon eggs, nightcrawlers, minnows, and more all prime for the taking. The right bait helps catch the right fish.

Rudzinski's tips? Minnows and nightcrawlers are a solid pick at this time of year for walleye and perch. Once steelhead season begins when the weather cools, the debate rages on among anglers about what bait works best.

"It all depends on what you like," Rudzinski noted.

Nancy Snyder has been fishing in Lake Erie for more than 40 years – she prefers emerald shiners, she said, since that variety of minnow attracts perch. And on a sunny Saturday in August, apparently half of Erie had the same idea. Snyder said one of her favorite lake fishing spots was crowded.

Whatever they're biting on, Pennsylvania's sportfishing industry brings big bucks to the keystone state. A 2008 report from the American Sportfishing Association – the latest statistics available – indicates that Pennsylvania ranks No. 6 in the nation for angler expenditures (bait and tackle, fishing equipment, boat fuel, lodging, etc.), with 994,000 people taking part in the sport during the year.

Each year, though, the composition of the lake's living things is just a bit different – and things really started to change in the late 1980s.

But if it's native to Eurasia, how the heck did it get to Erie?

Ballast water, Andraso explained, is carried by freighters who travel sans freight across the ocean.
Meant to carry heavy loads, freighters could risk tipping or rolling over if they cross the Atlantic without the extra weight. So the crews pump water into ballast tanks and cross the ocean to pick up the cargo. Once they receive the cargo and no longer need the excess weight of the ballast water to keep them stable, they release the water – pumped from where they were initially docked – and with it, all the algae, larvae, plankton and fish.

"I essentially have a giant aquarium – mobile – and then I dump that aquarium wherever I stop to get my cargo," Andraso said.

Zebra mussels are scrutinized by environmentalists because they concentrate high levels of pollutants – mainly mercury and PCBs – in their tissue. Fish who munch on zebra mussels consume those pollutants, too, which could be a threat to the lake's biodiversity and, potentially, the health of people who eat them, reports Pennsylvania Sea Grant. That phenomenon is known as "biomagnification."

Another non-native species, the round goby, was introduced to the Great Lakes through ballast water in 1992, Andraso said, which has caused concerns among anglers for its penchant for the eggs of smallmouth bass. But in a study Andraso and his team conducted, they found that – interestingly enough – the round goby's diet consists of 95 percent zebra and quagga mussels. When introduced to a new environment, he said, non-native species first grow exponentially – and then they reach a point where they out-strip their resources, another species learns to eat them or they contract a disease. At that point, Andraso noted, the numbers tend to drop quickly and they reach a lower number where they can survive stably. He suspects that's what's occurring with the zebra mussels now, and soon, the round goby population will follow suit.

In an area where zebra mussels are very concentrated – South Pier – Andraso and his research team found as many as 90 round gobies per square meter.

Andraso noted that existing species of fish in Lake Erie have already begun to adapt to the gobies. Smallmouth bass love to eat them, he said, and walleye and perch eat the smaller ones.

"All of these non-native species have changed the lake ecosystem in some way," he said. "The lake's different than it was. We're not going to totally get rid of these things."

Other non-native species in the Great Lakes, like the sea lamprey, have been around longer – the literature cites this pest as possibly native to the Finger Lakes and Lake Champlain, and it wiggled its way to Lake Ontario where it was first spotted there in the early 1800s. (Some biologists, though, believe that the sea lamprey is native to Lake Ontario, while others believe it swam to the Great Lakes through the Erie Canal when it opened.) However it got here, the sea lamprey attach themselves to native fish – mainly whitefish, lake trout, and chub, reports the Wisconsin Department of Natural Resources – and suck their blood and other bodily fluids for sustenance. One 12 to 20-inch lamprey can eat up to 40 pounds of fish in its lifetime, the WDNR reports.

Snyder has seen the characteristic mark of the lamprey – a circular lesion on the side of a fish – while out perch fishing.

"Sometimes you see markings on perch – you'll see bruise marks on them," she said. "It looked like it had been attacked."

While discussing non-native species, Andraso notes that certain species of gamefish – brown trout, coho salmon, Chinook salmon, steelhead, and white perch – are not native to this area, and were intentionally introduced in the Great Lakes for sporting purposes.

"I like to say 'non-native,'" he said. "Because, 'invasive' – you get this connotation of evil. But things like the steelhead that so many people come up here to fish for – half of Pittsburgh comes up I-79 on the weekends to fish for the things – they're a non-native species."

All eyes, then, are on the charismatic, leaping fish, the Asian carp, popularized through YouTube videos and Animal Planet's "River Monsters." These fish are easily startled by the sound of a boat motor, and boaters have to wear football helmets to protect themselves from their tendency to jump out of the water and land into boats or actually onto boaters, Andraso said. The fish can jump up to 10 feet high, and they weigh on average 30 to 40 pounds each – though some record-breakers have tipped the scales at 110 pounds.

To break it down: being hit by a startled 30- or 40-pound carp thrashing through the air would be akin to the weight of a well-chucked microwave. Not pleasant. And that's not to mention the potential damage to boating electronics or equipment, or personal items not intended to be covered by fish slime or excrement.

It's no wonder folks are working so hard to keep them out of the Great Lakes.

The term "Asian carp" actually refers to two separate species of carp brought in from Asia – bighead carp and silver carp. Both species are voracious eaters of algae and plankton and were imported to the southern U.S. to keep aquaculture facilities clean – they can consume 5 to 20 percent of their body weight each day, reports the Asian Carp Regional Coordinating Committee. When the Mississippi River flooded, Asian Carp got loose and started reproducing rapidly – and, eventually, causing a threat to the native species of the area by eating the key source of food for many small fish.

"People are concerned that they'll lop the whole bottom off the food web," Andraso said.

In some areas, the ACRCC reports, Asian carp comprise more than 95 percent of the biomass, and they compete directly with native species of fish for food. Commercial fisheries in the Illinois River regularly catch up to 25,000 pounds of Asian carp per day, and their value is much lower than that of the native fish whose food supply is being crammed out by these ravenous eaters.

"If they don't do something to stop them, they're only bound to get here," Snyder said. "What they need to do is with these ballast tanks – they shouldn't be able to empty those tanks into the Great Lake waters."

The financial impact of an Asian carp migration to the Great Lakes could leave a big dent in the Great Lakes' annual $7 billion fishing industry, as reported by the American Sportfishing Association.

Though no live Asian carp have been found in the Great Lakes, biologists – including the U.S. Army Corps of Engineers, the U.S. EPA, the Great Lakes Fishery Commission and the U.S. Fish and Wildlife Service, among others – are working jointly to prevent them from swimming from the Illinois River-- where they have been found-- to the Great Lakes. One big project: an electric dispersal barrier in the Chicago Sanitary and Ship Canal, which emanates an electric current in the water which immobilizes fish swimming through it.

"I think it's just a matter of time before somehow, a few individuals get around it," Andraso said.

"These Asian carp, if they manage to get into the Great Lakes – if the government doesn't do something – they'll definitely have an effect on the fishing in Lake Erie and the other Great Lakes," she said.

Will the Asian carp one day cross into the Great Lakes? Only time will tell.

Want to help stop the spread of non-native species? Take a tip from the Pennsylvania Fish and Boat Commission:

When retrieving your boat for the day, check the boat, motor, and trailer for weeds and other things tagging along.

Wash your boat's hull with hot water or with a high-pressure spray.

Drain livewells, bilges, and other compartments.

Drain all standing water from your boat.

Don't dump leftover bait into the water you're fishing unless you collected the bait there.

And make sure to check out the Fish and Boat Commission's website to stay up-to-date on fishing laws and regulations and consumption advisories, as well as information on how to obtain a fishing license (you have to, if you're 16 or older!)

For more information about the Asian carp, visit asiancarp.org, a joint venture between the U.S. Fish and Wildlife Service and the University of Arlington.

by Jonathan Burdick2/12/2020, 1:15 PM
How Erie's hub for black musicians thrived amidst adversity

Getting the Best of Valentine's Day