Last Man Standing: 1917 is an Experience Sometimes at the Expense of Drama

The result of such intense cinematography is engrossing but occasionally overwhelming 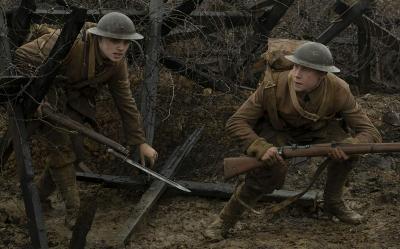 Sam Mendes' (American Beauty, Jarhead) new war film 1917 is being billed as an "experience" and it is definitely that. The dazzling camerawork and deafening sound design make the viewer feel like they are part of the action. However, this is often at the expense of story and character which feel very surface level. The film is in such a rush to get to the next amazing action sequence that it doesn't realize that its most striking moments are when it slows down to just agonize over what a slaughterhouse the first World War really was.

Following Lance Corporal Blake (Dean-Charles Chapman) who has been ordered to trek nine miles across the battlefield to get to a battalion that's walking into a trap. If he doesn't get there by dawn, 1,600 men (including his brother) will die. Along with Lance Corporal Schofield (George MacKay), they must now race against time to complete this seemingly impossible mission.

As I've mentioned, Roger Deakins' cinematography is absolutely amazing, making the entire film look like a single, unbroken shot. The result is engrossing but occasionally overwhelming as the technical mastery sometimes takes precedence over the human stories. Interestingly enough, the film is most impressive when it just languishes over the horrifying visuals. The images of the battlefield as a desolate wasteland littered with debris and rotting corpses do far more to demonstrate the tragic waste of human life than the action sequences ever could. In the end, Mendes' film is an impressive technical feat covering a fairly standard war film. — Forest Taylor