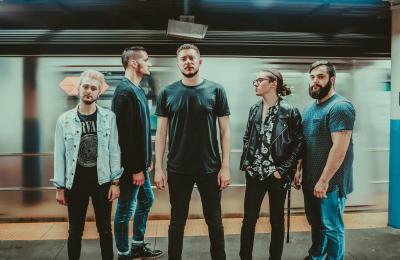 Boys of Fall are back at the Ballet Haus after their March performance drew an energized crowd. The Detroit pop-punk five-piece are currently on tour promoting their new album Better Moments (Gold Edition), featuring reworked versions of songs from the original album released in late 2018. Meanwhile, they're still releasing new singles — their latest release, "Fake Smiles," dropped on Aug. 16. The band can be found on platforms like Spotify where their stream totals have eclipsed millions.

Lights + Letters (formerly known as Stillbright) is a locally-formed alternative rock trio. They were most recently seen performing at Celebrate Erie, where they promoted their 2018 EP Tell Me and gave fans a sneak peek at new songs. Maroon River will be playing their debut show at the Ballet Haus. The duo is comprised of Jaret and Anthony Bretz, formerly members of Red Creek.

Once again A Waffle Miracle will be in attendance serving up gourmet waffles with a variety of sweet and savory garnishes. Also be sure to stop by and check out Melancholy_*, a local clothing brand rooted in embracing mental illness and promoting self-love and personal growth. — Dylan Tutmaher