Later, Gator: Crawl isn't Nearly as Fun as It Should Be

Crawl underperforms in both suspense and ridiculousness 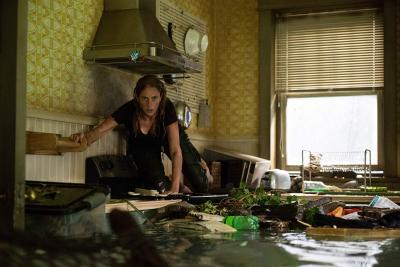 With the summer movie season here, it's often fun to find the scrappy, low-budget entertainment that comes out in conjunction with all the mega-blockbusters. The thriller Crawl looked to be just such a film. From the director of the surprisingly decent remake of The Hills Have Eyes, produced by the great Sam Raimi, and with a premise too intriguing to turn down (alligators in the house!), I went in expecting some over-the-top scares. Unfortunately, Crawl underperforms in both suspense and ridiculousness.

The film stars Kaya Scodelario as Haley Keller, a college student who races back to her childhood home in small-town Florida because she thinks her father (Barry Pepper) may be in trouble during a massive hurricane. She arrives to find her father severely injured and now must get him out as the floodwaters envelop the house. To make matters even worse, Haley soon learns that the house is being invaded by an army of giant alligators.

The director makes great use of the location, filming in tight, claustrophobic spaces that only become tenser as the waters slowly surround the characters. Also, as silly as they are, the gator attacks are satisfyingly brutal. Sadly, the whole thing doesn't mesh into a compelling story. The performances are all wildly over-acted and the film's themes are delivered with all the subtlety of a Category 5 hurricane. The film's story is far too ridiculous to be taken seriously, but the plot is taken too seriously to be much fun. Crawl had all the elements to be a really enjoyable summer shocker, but the execution produces only middling entertainment. — Forest Taylor