Apollo 13, COVID-19, and how we can adapt to adversity 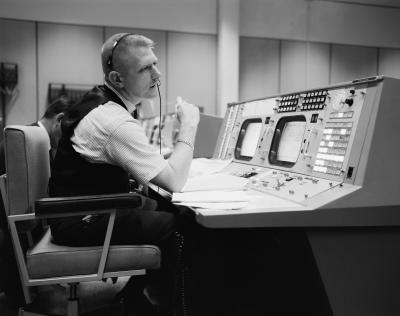 NASA; Restored by Adam Cuerden
Eugene F. Kranz at his console at the NASA Mission Control Center, May 30, 1965.

Apollo 13 was the seventh crewed mission in the Apollo space program and was to be the third to land on the moon. However, the mission was aborted 56 hours in, due to an onboard explosion in the service module. Within a matter of hours, a series of critical real-time decisions not only had to be made, but solutions needed to be developed.

These events were well-documented, of course, most famously in the 1995 Ron Howard film, Apollo 13. In 2000, NASA Flight Director Gene Kranz penned an autobiography using the film's tagline: Failure Is Not An Option. One of my favorite scenes in the movie comes at one of the most pivotal moments. Kranz listens in as two NASA directors discuss the low survival chances for the crippled spacecraft.

"I know what the problems are Henry," one of them says. "This could be the worst disaster NASA has ever experienced."

In response, Kranz interjects "With all due respect sir, I believe this is going to be our finest hour."

In Apollo 13, the entire team from ground to space was presented with all the same information as Kranz was. And yet, Kranz's response to the situation was markedly different than others. During this time, Kranz and Mission Control continually communicated with the crew – providing updates, potential outcomes and delivering necessary news – both good and bad.

The best test of leadership is the response during times of adversity.

The last two weeks have set a precedent for our community in this realm. Every single day, I know that I will have access to updates about changes that are affecting our community, in real-time. The amount of information and the speed at which guidance changes can overwhelm even the most skilled leadership, but the leaders in Erie have navigated this process almost seamlessly. The constant presence of a visibly clear and calm County Executive at her daily briefings, the continual updates from our health department, city officials, and economic development organizations have been essential to successfully manage this time of confusion and uncertainty. It is through consistency that credibility builds. And credibility creates a foundation for us to adapt and overcome even the greatest challenges.

No one can predict the duration or severity of this pandemic and the long-term impact it will have on our organizations, economy, and communities. But we can take solace in knowing we are being led by individuals and organizations that want to see us thrive. It will empower us to stay safe and help us stay focused.

Because it is times like this, well, that failure just isn't an option.

Apollo 13 is in Rebecca's top five favorite movies. She has a signed copy of Gene Kranz' Failure Is Not An Option; and a softcover version (unsigned) she can actually read, because her bibliophile husband is worried she will destroy the valuable one. You can follow her on Twitter at @rstyn.