Flowers in Frontier Park must mean winter's almost over! Unless it's just Matt Flowers, who's talking Full Moon Dance Party with LEAF. 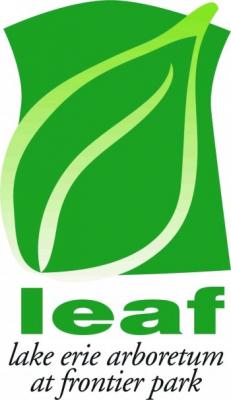 There comes a point in every Erie winter where most of us Erieites catch an itchy kind of sickness. If your eyes burn from the ghostly glow of your television and your couch cushions don't spring back anymore, then you may be suffering from the severe illness of Cabin Fever.

While a pasty shade of fluorescent white covers our skin, we flock to warmth like termites to timber, making a nest for ourselves,which we never leave until the thermostat finally clicks off, marking the shiny rays of summer. But you don't have to reach the end of the tunnel to see the light; it's only right around the corner.

Lake Erie Arboretum at Frontier Park (LEAF) is hosting its 8th Annual Winter Festival Sunday, Feb. 24. LEAF has not only improved the scenery around the park, but also the city's cultural landscape. The organization was established in 1998 to create and foster the region's first-ever public garden.

"I always like to explain it like a tree museum," says Kathy Dahlkemper, vice president of LEAF.

The idea was sparked by a park in Youngstown, Ohio, ironically named Millcreek Park. According to LeafErie.org, Frontier Park – 1501 W. Sixth St. – "is home to over 225 different varieties of trees." From trees to trails, LEAF – through generous donations and grants – has put over $2 million into Frontier Park.  Now the park sports new pathways, bridges, an amphitheater, a labyrinth, a gazebo, among other things.

"One of our missions is to provide recreational opportunities for the community," Kathy states. The other "is to really increase our education program." With that mission in mind, Winterfest began – an event free and open to the public. "Not everyone knows what to do to enjoy winter and enjoy the outside," Kathy says. But at Winterfest the activities are endless. LEAF will be catering to the kids from noon to 4 p.m., where they can enjoy horse-drawn wagon rides, ice carving, face painting, ice-fishing demonstrations, kite flying, burn barrels, clowns, sledding, tobogganing, snowman-making, a recycled igloo contest, a recycled sled race, the Tree-sure Hunt, and a duck race. What's more, from 4 to 8 p.m., they'll be hosting the Full Moon Dance Party for the 18-and-up crowd.

Simply put: the festival is tried and true – "Families love it, kids of all ages love it [too]," Kathy confirms.

In the fall of 2012, the Education Building was erected in Frontier Park between the tennis courts and the playground, making the area a multiuse location for recreation and education.  After a lengthy process of grant proposals and two sets of architectural designs, the structure was finally built. Now brides can rent this space for bridal showers, parents can host their children's birthday parties and nature enthusiasts can give lectures on the joys of pruning and landscaping. The space's versatility is endless, but more importantly, it gives the public a reason to embrace the park and unplug. But regardless of whether the building is rented for a private gathering or utilized as a naturalistic classroom, it's for the community's use – much like the park itself.

Thankfully, and obviously, LEAF is environmentally conscious, as it's imperative this land stays untainted, therefore, the building does not impede on Frontier's greenery. Many varieties of trees – some not native to this area – can flourish in this park because of its microclimate. This location is a perfect distance from the bay and the weather conditions are flawless for exotic trees – such as the Mimosa, Corkscrew Willow, Russian Olive, and Douglas Fir – to thrive, making Frontier unlike any other park you could stroll through. "A lot of people are calling LEAF Erie's Central Park," Kathy says with a pleased voice.

But until those blossoms blossom, LEAF is determined to get the city moving – even when the trees are leafless.

"You don't need to hibernate," says LEAF Board Member Matt Lebowitz, earnestly. "Why ditch four months of outdoor activities just because it's a little chilly?"

Matt is in charge of the Full Moon Dance Party taking place at this year's Winterfest – the celebration's newest attraction. Inspired by the Blues and Jazz Festival, Matt thought Erie could use an event that would warm up the region's biting air.

If your winter coat, a pair of long johns, and a winter cap won't keep you warm, you can always rely on a few cold ones. "We're not promoting alcohol but if people want to bring their own they can," he says matter-of-factly, "the same way [as] Blues and Jazz Fest – people are very cool about it. They bring it, they don't make a big deal out of it, and they don't get stupid. That's what we're looking for."

Matt relates the Full Moon Dance Party to the Quebec City Winter Carnival, a party where people enjoy the great outdoors despite sub-zero temperatures. If it's simply the cold keeping you on the couch, you have to look outside the box – the glowing rectangle that ensnares us in the warmth of a false hearth. Once you're outside dancing, "you just appreciate the fact that we're still in a beautiful natural setting – the park is still there," Matt says, reminding us that you can always have a good time in Erie, not just during shorts season.