by Erin Phillips
View ProfileInstagramRSS Feed
January 3, 2023 at 8:30 AM 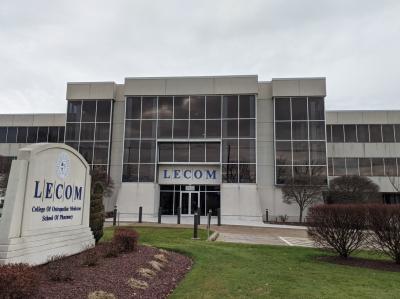 Jeffrey Phillips
The original campus of LECOM, located at 1858 West Grandview Blvd, was just the beginning for this rapidly expanding organization. LECOM now has campuses in four locations and is now the largest medical college in the United States.

On Christmas Eve, 2022, the Lake Erie College of Osteopathic Medicine (LECOM), which has seemed to exist as long as memory serves, actually celebrated their 30th Anniversary. On December 24, 1992 LECOM was granted a charter by Pennsylvania Senator Robert Casey, Sr. to start an osteopathic medical school in Erie, Pennsylvania. The very first class began on August 9, 1993 at what was then their new campus on West Grandview Boulevard. And if you've been paying any attention, the footprint, scope, and reach of LECOM has grown exponentially since then. And while the main building for the campus is still at that West Grandview location, LECOM now boasts four campuses in three states and holds the title of the largest medical college in the United States. That's no small feat.

In addition to the reach of LECOM's colleges, including campuses in Bradenton, Fla., Greensburg, Pa., and Elmira, N.Y., the organization has built the nation's only osteopathic health system including its own teaching hospitals, physician's network, and services for older adults. To date, LECOM has over 16,000 graduates. The institution was founded by Dr. John Ferretti, president and CEO, and Dr. Silvia Ferretti, provost, senior vice president, and dean of academic affairs, and the mission of the school "is to prepare students to become osteopathic physicians through a program of excellence in education, research, clinical care, and community service to enhance the quality of life through improved health for all humanity."

In addition to the college of medicine, LECOM now has a school of pharmacy, a school of dental medicine, a school of graduate studies, as well as a newly established school of podiatric medicine that will welcome its first class in 2023. According to Matt Bresee, vice president of marketing, communications, and organizational culture for LECOM, "December 24th, 1992 marks the official start of LECOM's great history of educating physicians and making a massive impact on healthcare delivery globally. We intend to celebrate our 30th anniversary throughout 2023 with events and promotions for our students, faculty, alumni, and the community."

Should Old Acquaintance Be Forgot?