A nod to Richard Boler's Showcase article that just might have started a nationwide sensation. 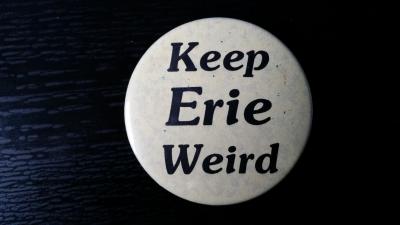 Many attribute the genesis of the "Keep ____ Weird" phenomenon to Austin. But back in 1982, writer Richard Boler published a satirical piece in Showcase that encouraged readers to get up-in-arms about the city's greatest crisis: its rising draft beer prices. He called on his fellow citizens to join CHUG: the Committee to Harangue Unscrupulous Greedmongers, and promised those who wrote to the paper a "Let's Keep Erie Weird" button to wear as a symbol of their solidarity.
To Boler's (and Showcase's) surprise, a handful of readers sent in their $1.25, and the buttons then had to be printed. "Let's" didn't quite fit, so "Keep Erie Weird" was born.
We thought it might be fun to revisit some of Boler's original arguments in support of weirdness, many of which still apply today.

"I am a product of this strange town," Boler writes. "Born and reared on the east side, I can spit, shoot, and bowl with the best of them. And so, it is with a native's prejudice that I speak.
"In earlier years, I tended to see only this city's weaknesses, the limitations that I felt it was unjustly placing upon me. I knew an Erie that was boring beyond redemption; I was weary of its cliquish power base, its weather, its politics and politicians, its unearned cynicism. I wanted out, please. Quickly.
"The succeeding years have softened my harsh analysis somewhat. And, while there is no doubt that these blemishes still exist here (in spades), I have since stumbled upon some of the city's unique merits."

"To me, Erie's saving graces are evidenced in subtle ways," Boler continues, and "none has impressed me more than spending an evening in the city's bars and getting irretrievably jugheaded for under five dollars."

"This is nothing to scoff at (so quite that scoffing, you look ridiculous). In most other cities, draft beer costs appreciably more." [as it still does.]
"It has delighted me immensely in the past to go bar-hopping with out-of-towners. My shirt-buttons would nearly pop loose from their moorings when these strangers would lay down two or three dollars on the bar for a round of beers.
"'Put that away,' I would say magnanimously, stuffing all but a single bill back into their pocket. 'This is Erie, pal, the Disney World of drafts.'"

Then Boler turns toward the egregious plague creeping into some Erie establishments, where there seems to be a desire to "pretend, just for a moment, that one is not in a meat-and-potatoes Great Lakes city, after all, but in a cosmopolitan setting not unlike those found in Youngstown or Newark.
"The mark of true class, naturally, is outrageous prices," he explains. "Enter the $1.25 draft.

"Listen, I normally wouldn't give a walking hoot how others choose to blow their money. Except for this: Greed is contagious. The fact that some bars are getting away with these prices won't be lost on other local entrepreneurs."

Like all responsible cultural critics, Boler didn't just stop identifying the problem. Here, he introduces CHUG, his solution to maintain Erie's "Disney World of Drafts" status ... and its weirdness.

"I hope that I am not overreacting here," he writes. "But the implications of this phenomenon frighten me. Can exorbitant rents and rampant pornography be far behind? Call me paranoid, if you will. Call me provincial. Call me irresponsible. Call me Shane … I don't care. There comes a time in each man's life when he has to take a stand (or, in this case, a seat) somewhere.
"That is why I have formed CHUG (the Committee to Harangue Unscrupulous Greedmongers). GHUG's sole mission is to stomp out excessive draft beer prices in the tri-state area. How? Through a boycott, perhaps. And political pressure.
"To hell with Social Security and unemployment. We're talking about a cheap night on the town here!"

And then, Boler makes the call to action that resonates today in America's most purposefully weird cities:
"If you wish to join CHUG, write to me in care of this newspaper. You will receive a list of all bars currently charging ridiculous prices for beer and a 'Let's Keep Erie Weird' button.
"Include $1.25 for shipping costs."

Many, many thanks to Richard Boler, obviously, and to Doug Rieder, retired editor of Showcase, especially for keeping track of one of these original "Keep Erie Weird" buttons: a fine talisman as we assembled this issue of the Reader. And as for the button's message? Yes. Let's.