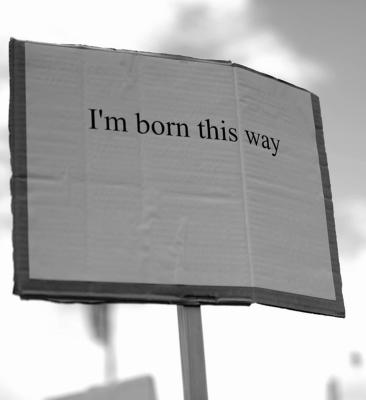 We sometimes fall into the trap of understanding something so rigidly that we can close ourselves off to new insights, terms, or descriptions – like insisting upon a flat Earth at the center of the galaxy.

Categories are useful because they help us name our realities. But as wise people have noted, any attempt to describe something is a slippery task. Words never quite capture what we're trying to describe (think of how we all struggle to articulate deep feelings of love, joy, pain, or sorrow).

Likewise, we sometimes fall into the trap of understanding something so rigidly that we can close ourselves off to new insights, terms, or descriptions – like insisting upon a flat Earth at the center of the galaxy. And so, as "description" is ongoing work for everything, it most certainly requires great care when describing human sexuality and gender-identity.

But we've also come up with more personalized terms. In the 1950s and '60s, some self-identified homosexual people preferred the word "homophile" in order to emphasize that homosexuality is as much about "love" (philia)—as it is about sex. Yet as history would bear out, "homophile" gave way to the preferential categories of: lesbian, gay, bi, and straight. And with more insight into gender-identity, "transgender" was established as a category too.

Of course, we may be so accustomed to these terms – lesbian, gay, bisexual, straight, and transgender – that the effort to define them, however incomplete those definitions might be – may seem a bit remedial. But if we are going to better understand the relationship of the LGBT community within the larger Erie community, providing basic definitions may be useful for our mutual understanding.

We can begin with the term "Lesbian" (L). This term refers to women who are sexually and emotionally attracted to other women. "Gay" (G) refers to men who are sexually and emotionally attracted to other men. "Bi" (B) describes people who have sexual and emotional attraction to both physical sexes. "Transgender" (T) describes people whose innate gender identity does not match one's physical sex assigned at birth, as well as those whose "masculine" and "feminine" expressions reverse social norms for male and female bodies.

And yet, even these brief definitions of LGBT are woefully incomplete. What is more, there are those who describe themselves as "Queer" (Q)—for whom lesbian, gay, bisexual, straight, or transgender categories too narrowly restrict their sense of sexuality or gender.

Among queer-identifying folk are those who consider themselves "hetero-flexible" (heterosexual people who may enjoy, from time to time, a same-sex encounter), "homo-flexible" (homosexual people who may occasionally enjoy opposite-sex encounters), "pansexual" (people whose emotional attraction allows for a sexual relationship—regardless of one's sexual orientation or aesthetic preference for masculine or feminine characteristics), and "intersex" (people who are born with mosaic chromosomal patterns, providing for male and female physical characteristics—and sometimes, non-phallic/non-vaginal genital formation).

Complicating matters even more, some LGBT communities use the word "queer" as an umbrella term, under which all sexual and gender minorities may unite. As a result of such complexity, we in the LGBTQ communities sometimes refer to ourselves as belonging to an "alphabet soup." Indeed, the more we investigate sexuality and gender, the more letters we add to our community—even straight allies – who we often designate with an "A," however, "A" is also used to include people who are asexual.

Could we simplify this? Maybe. In fact, earlier this year, London-based therapists suggested the terminology of Gender and Sexual Diversities (GSD) to replace the alphabet soup of

GSD would indeed include all of us. Because when it comes down to it, we each have a wide array of sexual experiences, feelings, and relationships – or none at all; as well as varied ways of performing our gender identity—whether we are LGBT or straight; pansexual, hetero/homo-flexible, intersex, or queer.

Of course, there is an inherent temptation to overlook our differences and rally behind the rhetoric that we are "all the same." We do better, I think, to learn and respect our differences by acknowledging the plethora of gender and sexual diversities, as well as keeping ourselves open to new insights – and definitions – that help us better understand ourselves and our neighbors.