12 pleasing places to unpack lunch or dinner this summer 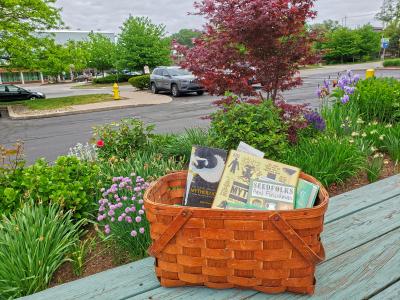 Liz Allen
Pack a picnic, read a book. The Erie County Library will be adding more picnic tables to Blasco, the main library, and also installing picnic tables at the Lincoln Community Center, Edinboro and Iroquois branches this summer. The idea is to encourage patrons to read and to enjoy the outdoors at the same time.

Last summer, when the pandemic grounded us, the front porch became our perch.

We ate most meals out there on an antique porcelain table, rescued from the dusty basement. The table sat next to a wobbly wooden bench, where I grew potted herbs to snip for our dinner entrees, usually eaten after a fierce game of Scrabble.

To decorate, I draped fairy lights under the eaves and arranged wildflowers in Mason jars.

Lounging on the porch swing, I read poetry and gardening books I had stored in an old crate.

In the evening, we'd greet neighbors strolling to the sunset. Sometimes, we tuned into a Pittsburgh Pirates' game on the radio.

We lived as idyllic a life as possible during the time of COVID, but by this May, fully vaccinated, I was ready to vacate the porch for some micro-vacations, with two conditions: The destination had to be low-cost and close to the water.

Instead of a suitcase, I packed my grandmother's wooden picnic basket and set off to explore parks and public access points with views of Lake Erie or Presque Isle Bay.

When I learned that the Erie County Library will add picnic tables to Blasco and to the Lincoln Community Center, Edinboro, and Iroquois branches this summer, I figured I should book-it and brown-bag-it at the same time.

Over three days, I visited five libraries, a dozen parks or green spaces, and 10 eateries.

Here is my report on my picnicpalooza:

I bought a chocolate chip cookie from Teresa's Deli - Lakeshore (it was too early for one of its "famous giant subs"), then drove to Lincoln Community Center library branch at 1255 Manchester Road, where I checked out a young adult novel, The Voting Booth, by Brandy Colbert. From there, I headed north on Manchester to the Walnut Creek Marina.

I love visiting this rocky beach, where Lake Erie looks as ferocious as the ocean. I didn't see any picnic tables but I set up a folding chair to watch the crashing waves and to eye the purple martin houses. I plan to return to the Walnut Creek Marina Sunset Garden, erected in partnership with the Pennsylvania Fish and Boat Commission, some other evening.

Next up: The Friends of the Library's Bayfront Bookshelf gift shop at Blasco, then Blasco itself so I could check out three books on mythology to learn more about Minerva, the Roman god immortalized in a restored statue on the library's first floor.

Outside, on the library's east side, I stopped at a picnic table to admire the lush garden, especially the glorious irises. This place, I decided, is where I will re-read Seedfolks, by Paul Fleischman, a slim portrait of gutsy people in inner-city Cleveland who came together to nurture a community garden.

The Millcreek Branch Library won't get a picnic table because of its location in a Millcreek Mall shopping plaza. But recently by chance, I discovered a place to commune with nature not far from the mall's acres of paved parking lots. After I checked out Home Port Erie. Voices of Silent Images, by Robert J. MacDonald and David Frew, from the "local interest" section at the Millcreek library, I headed to Bridger Park on Walnut Creek in Millcreek Township, at Zimmerly and West roads.

This park has been developed near a noisy sewer treatment facility, but a two-minute walk on its trails takes you away from the racket and into a peaceful setting filled with wildflowers, birds, and butterflies. There are several metal tables with built-in seats, but I'd probably picnic on one of the standalone benches, near the gurgling creek, to watch with wonder that nature can coexist so close to our region's retail hub.

Next stop was the Edinboro Branch Library, where I hoped to find Bridget Jones's Diary, by Helen Fielding, but it wasn't in the stacks. Randalee Gross, branch manager, said she picked up that book at a hotel in Hawaii when she forgot to bring something to read. It's the perfect vacation book, she said, because the diary format gives you "bite-sized" chunks of reading to enjoy, three pages or so at a time.

Rather than books, I checked out seeds for spinach and summer squash from the Edinboro branch. After planting the seeds and harvesting the produce, the borrower is expected to return dried seeds to replenish the inventory, stored in packets in an old card catalogue. Later this summer, maybe I will eat my homegrown veggies at Edinboro Lake, which has a lovely picnic pavilion. This is also a great spot to bring locally grown food items from the Edinboro Market or to indulge your sweet tooth with a treat from Edinboro Chocolaterie, both on Erie Street in downtown Edinboro, or the Dairy Supreme on Plum Street, which has an amazing variety of ice cream, frozen yogurt, shakes, sundaes, and sandwiches.

Back in Erie, I picked up my husband from the Y, then took a drive with him to Joseph Walczak Sr. Park, which spreads out between East Grandview Boulevard and Alan Drive. The sky was cloudy, but the view of the lake, miles away, was still breathtaking. Some young eastsiders have even told me that you can see Canada on a clear day. In any case, with a playground and lots of ballfields, there is plenty to do at this park, and the sheltered picnic area means you can eat out, rain or shine.

I crammed a lot into this final day, starting at the Lakeside Boat Launch in Lawrence Park, which has a spectacular lake view from its benches and one picnic table, and winding up, many hours later, at the South Pier in the City of Erie.

Getting to the Iroquois Branch Library, 4212 Iroquois Ave., can be a hassle now due to construction on East Lake Road, but the short detour through Lawrence Park is a welcome side trip. You'll see why Lawrence Park is on the National Register of Historic Places and discover local eateries that are worth a visit, including the old-fashioned Dairy Queen across from the library.

Before wending my way into the township via the detour, I stopped at Gary's Superette, 4703 East Lake Road, where owner Joel Faulhaber said his store carries lots of "grab and go" items, including warm garlic-Parmesan pepperoni balls, perfect for an impromptu picnic.

I might have also stopped for takeout at the My Way Bar and Grill, 2218 East Lake Road, specializing in Indian and Nepal dishes, but it was too soon for the early-bird menu, available at 1 p.m.

Instead, I made a mad dash throughout the afternoon and evening to finish off my checklist.

Chautauqua Park, at the foot of Chautauqua Boulevard, has a pretty picnic shelter and a charcoal grill. Here, I discovered the cascading waters of McDannell Run tumbling into the lake. The James N. Thompson Land Lighthouse Park, at the end of Lighthouse Street, offers a covered shelter, a grill, a playground, and access to the Lighthouse on Saturdays and Sundays (for a fee) and for free on the first Tuesday of the month.

The Erie-Western Pennsylvania Port Authority has covered metal picnic tables at the South Pier; there are also portable restrooms and a bike rack. The port also has one available covered picnic table close to the dock area between Donjon Shipbuilding and Repair and DaVita Erie Dialysis on the Bayfront Parkway. This is a great spot for a close-up look at Erie's working port.

Nate Levy-Jaycee Park, along East Second and East Third between Holland and German streets, only offers a small glimpse of the waterfront, between the treeline, but what you get in exchange is the chance to play chess or ping-pong on the game tables. There's also a playground and tennis courts.

At Bayview Park, you can pose for pics at the new Erie sign, pump the new metal swings, picnic in the covered pavilion, or walk east on the bluffs to another picnic table.

In between park visits, I stopped at Trawka's Market, 712 Payne Ave., where owner Tom Walsh recommended any of his specialty sausages or homemade salads for a picnic. I didn't have time to cook sausage, so I bought a jar of Nathan's sweet horseradish pickles for my husband, a native New Yorker. At Franco's Café in the Renaissance Centre, owner Larry Franco said his chicken salad on croissant, salads, and paninis are big take-out items. Thelma Blanks, who co-owns Café 710 at 7 West 10th St. with her daughter Mabel Howard, says any of her homemade baked goods would be a big hit at a picnic, including the cookies, banana bread swirled with chocolate and peanut butter, or her new made-from-scratch cheesecakes.

I was so busy visiting parks, I didn't really eat much. But I have three months of summer to hit "pause" and enjoy some peaceful picnics.

Liz Allen is going to spring for $3 for a "mystery brown bag" of books the next time she visits the Bayfront Bookshelf operated by the Friends of the Library. You can reach her at lizallenerie@gmail.com

Picnic at the library

"They'll be perfect for library patrons and anyone in the area to enjoy while reading a good book, taking advantage of the free Wi-Fi at all our libraries, or just basking in the good weather," said Sheryl Thomas, acting library director.

"Making better use of our outdoor green space is a priority, especially as a way to support the county's Blue Zones initiative to promote healthy lifestyles," she said. "The pandemic has also emphasized the need for more outdoor areas to enjoy, even as restrictions are easing."

As for a favorite book she would recommend, Thomas said it's hard to choose but suggested The Perilous Gard by Elizabeth Marie Pope. "It's a Newberry Honor Book and a retelling of the Scottish ballad of Tam Lin. Wonderfully atmospheric with a likable heroine, a good dose of enchantment and a dash of the macabre, its setting in a rainy castle and underground passages make it the perfect mix for a sunny day outside." – Liz Allen