LifeThruMusic and the Downtown YMCA Wish a "Merry Little Christmas"

Recently featured on Good Morning America, the program offers up a holiday tune. 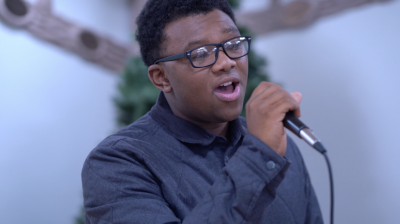 On Nov. 26, Erie made national news – for putting something truly good out into the world. "When I was younger and got transferred into a different school, I wasn't accepted like I was accepted here," explained 18-year-old singer and multi-instrumentalist Elijah Lyons. "Here" is Erie's Downtown YMCA Teen Center, and specifically, the program LifeThruMusic – run by director Corey Cook. The segment ran on Good Morning and brought a quick national focus to the program, which helps kids connect via music education and composition. Participants even helped to pen a piece that the Erie Philharmonic performed. There's also a strong film and video presence in the program, and this season, they decided to give back a little, tying together both media for just in time for the holidays.

This Erie Reader exclusive video of Lyons, featuring Cook on keyboards performing the soul-warming 1944 hit "Have Yourself a Merry Little Christmas." Filmed at the Downtown YMCA Teen Center by Alex Staley, and showcases Lyons, a senior at Cathedral Prep. The song was originally composed by Hugh Martin, with lyrics by Ralph Blane. It first appeared in the film Meet Me in St. Louis and was sung by Judy Garland. The version most people are familiar with – presented here – was made popular by Frank Sinatra and features lyrical revisions that have helped give the song a warmer, joyous tone. In more recent years, it's seen versions from Michael Bublé and Sam Smith.

"Right now, people have been reaching out from across the country, from different organizations, different people figuring out how they can get involved," explained Cook. Aspects of the program were made possible thanks to Margaret Matthews and the David Matthews Composition School, John Lyons and the Film Society of Northwest Pennsylvania, and Erie Arts and Culture. – Nick Warren

Reptiles Take Over in a Scale-tastic Event