The debut EP for the "Old Town Road" singer and rapper 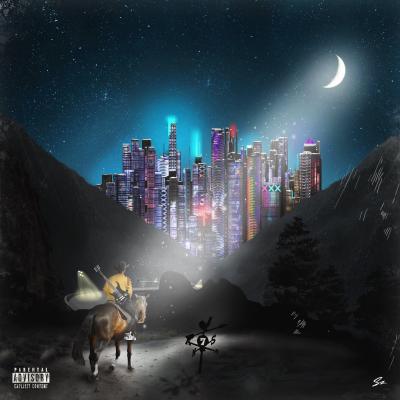 The rapper and singer responsible for the viral single "Old Town Road (Remix)" is out to do two things on his debut EP 7: get out from under the shadow of his meme-heavy hit, and craft another one worthy of following it up. Though the artist recently made headlines by coming out as gay on the last day of Pride Weekend, this particular record doesn't quite produce another hit; but he does throw enough darts at the wall to put on an impressive variety show. In reality, Lil Nas X only really repeats himself twice here: on the western-tinged, Cardi B-featuring "Rodeo," and on the "Old Town Road" bonus track, which exclusively appears for the purpose of maximizing streaming numbers. Cardi is one of two guests on the project, the other being Travis Barker, contributing drums to the Gym Class Heroes-esque "F9mily (You & Me)." 7 is a mixed bag for this exact reason; on his debut EP, Lil Nas X is a jack of all trades, but a master of none. Songs on 7 demonstrate potential — especially on the Nirvana-interpolating "Panini" and the straightforward piano beat of "C7osure" — but substance-wise, much like its lead single, it fails to be anything more than enjoyable in the moment. — Aaron Mook