Living (and Lagering) Off the Land

Sprague Farm and Brew Works builds beers from the ground up 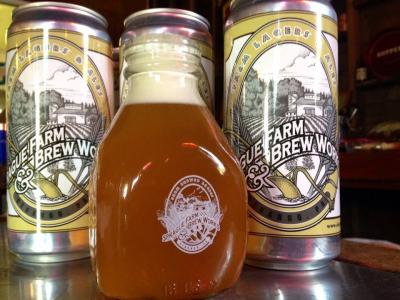 Matt Swanseger
Spragues Farm and Brew Works does not distribute their handcrafted libations, so the only way to take them home with you is in a growler (center) or crowler (sides) after stopping by.

"Land and water are not really separate things, but they are separate words, and we perceive through words," writes American conservation author David Rains Wallace in the collection Untamed Gardens and Other Personal Essays. Perhaps no single earthly substance illustrates his point better than beer.

For decades, Brian Sprague of Sprague Farm and Brew Works in Venango, Pa. has been bringing land and water together into the same keg. A 1977 article on homebrewing in the Mother Earth News tapped the curiosity of a then-teenaged Sprague, who began consuming as much literature as he could on the subject shortly thereafter. He purchased barley from a nearby feed mill for malting (60 percent of the world's barley is used as animal feed) and gave it a go.

Although he described his earliest beers as "miserable failures," he learned valuable lessons along the way. The most important was that "ingredients rule" — the most principle of those being barley, hops, yeast, and water. Also, since brewing is in large part a glorified chemistry experiment, one must understand "what they do" and how they interact.

Water's minerality and pH affect the expression of all the interactions that follow; the barley malts influence flavor, color, and body; the hops provide "spice," aroma, and bitterness; yeast ferments the sugars in the malted barley into alcohol. Today's brewer has more control over ingredients and process than ever. Pre-malted barley and hops from any part of the world can be at the brewer's doorstep in less than a week. Advanced technology exists to precisely measure and monitor a beer's progress and composition at any point in its journey.

Despite this, Sprague holds fast to a DIY ethos, applying a craftsman's mentality to his craft beers. The Farm and Brew Works property, which Brian and his wife Minnie purchased in 1997 (the brewpub opened in 2006), contains five acres dedicated to the growth of six-row malting barley and a quarter acre's worth of hops. The water used in the brewing is sourced from their own spring and well. Sprague's is one of few farm breweries in the country, and one of few capable of brewing "estate beers" utilizing only ingredients harvested on-site. There is not a single computer to be found in the brewhouse. Even the draft handles are hand-carved by Sprague, a masterful woodworker.

The demand is such that the Spragues cannot use exclusively homegrown ingredients; their net barley and hop yields constitute only 10 and 20 percent of their total volume, respectively. However, when Brian says they use what they can, he means it. One need only take a swig of one of their "driveway beers" for proof. Quite literally, a driveway beer might incorporate anything that grows along the brew farm's main pathway — maple syrup, roasted chestnuts, spruce tips, and hickory bark have all been used to add "special character" to the beer. Given their small size, experimentation is a luxury they can more easily afford.

At the end of the day, however, "you have to give people what they want," Sprague confesses. A niche crowd may clamor for that one-off "banana potato chip bologna beer," he jokes, but there are popular trends in the brewing world that one cannot ignore, even if they don't align with one's personal tastes. Over the past few years, styles like sours and New England IPAs (hazier and "juicier" than their West Coast counterparts) have gained a foothold. Although Sprague himself is not a fan of sours, Ira Gerhart, a former understudy and now-owner of Noble Creature Brewing in Youngstown, Ohio helped him develop a peace offering to the mouth-puckering preferences of today. Right now, of course, pumpkin beers are the seasonal sensation — last year's "Headless Spragueman" came in the form of a milk stout; this year's "Frostin' on the Pumpkin" is pumpkin-spice lager formulated for peak quaffability. It will be available in early October.

"We don't hit a home run every time, but I have a good idea about ingredients and how they work together," Sprague says. The fact that you can see them from the seat of a tractor makes the suds go down all the easier.

Sprague Farm and Brew Works is located at 22043 U.S. Hwy. 6 & 19, Venango, PA 16440. Bierhalla, the public beer hall barn, is open from 4 to 9 p.m. on Thursdays and Fridays and noon to 9 p.m. on Saturdays. The Pavilion (containing its own bar) can be rented out for special events. Kitty cuddles are free of charge.

Send questions or comments Matt Swanseger's way at mswanseger@eriereader.com. Send beer to the address listed on the inside cover.