The veteran comedian discusses his upcoming show at Jr's Last Laugh and how he he keeps comedy fun after years in the business.

by Alex Bieler
View ProfileFacebookTwitterInstagramGoogle+RSS Feed
April 15, 2015 at 9:00 AM 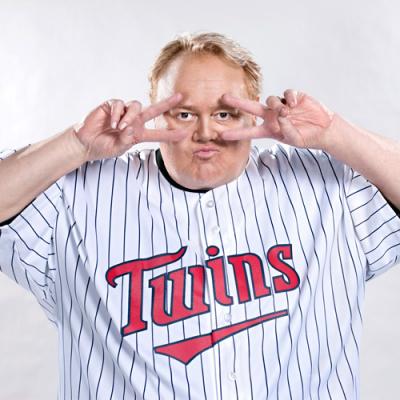 Between his stand-up comedy specials, multiple books, and an Emmy Award-winning animated show, Louie Anderson has made a lot of people laugh in his career. The veteran comedian and former host of The Family Feud isn't looking to slow down anytime soon, however, as he's still actively writing and coming up with what he thinks is his best work yet.

The proud Minnesotan will be putting his new material on display at Jr's Last Laugh during a six-show, four-night run starting Thursday, April 16. I had a chance to chat with Louie about his upcoming stint in Erie, what he does to keep focused with comedy, and what would happen if someone were to send "Karen the fruit buyer" to pick him up from the airport.

Alex Bieler: You're back in Erie after visiting early in 2014. Did Erie make a big impression on you?

Louie Anderson: I had so much fun!

AB: Was it your first time through?

LA: I think it was. Well, I may have been in Erie one other time, but I can't remember, to be honest with you. That's one of the main things about getting older. I like it when people come up to me and go "we had a lot of fun when you were here last time" and I say "did we?" I just agree with them because I don't want them to think I'm feeble minded yet.

AB: So how have you been doing since your last visit?

LA: I've been working really hard on a bunch of new material. It's been really fun. I love being funny, and I love coming up with new jokes. I love what I do still.

AB: That's good. You've been doing stand-up comedy for a while now. How do you keep it fresh instead of it feeling  just like a job?

LA: I have a talk with myself before every show. I just say, "Listen, you're a really great comic, and these people have come a long way to see you. You really know what you're doing, and you'll find a way to make these people forget about their troubles for the next hour and 15 minutes and find out something new about yourself in the process. And maybe, if everything works out, people will go away saying 'that's the best show I ever saw.'"

I think a person has to remind themselves why they do things. Say I'm on a phone call and somebody upsets me or I get some bad news. I better clear that slate before I get out with that audience, because I'm going to take that phone call with me and they're not going to understand why I'm sad or mad. They don't care. They didn't come for my problems; they came away to get away from theirs.

AB: Is that something that can be difficult to do?

LA: I think I did it more early on, but recently I've been writing a book about stand-up and did a boot camp a few years ago where I talked to comics – and all of the stuff I told them, I had to reevaluate with myself. That was an eye-opening experience for me. I told them to write more and do more, and because of that I shot a new special a year later.

AB: So it forced you to take your own advice.

LA: Yeah, otherwise I'm a hypocrite. Also, I like being challenged, and I think it was a good experience. If you really love what you do, you put up with the two airports, the person that's supposed to be in Vegas to pick you up, the hotel being not as good as you thought it would be, the food being less than adequate sometimes, the weather being terrible… if you love what you do, you have to be willing to put up with those things and dismiss them as part of the deal.

It's hard to travel nowadays. It' s not easier. Well, in some ways yes, as in olden times, it's easier, because I'm not going by stagecoach. My goal is really simple. My goal is to go where people see me and I turn their day around and relieve them temporarily of the burden they're going through. I think it's the same for all artists. If you believe in what you do, you get a tremendous amount of gratitude for having this ability, and I'm very grateful and humbled by the fact that I can do what I can do. For the most part right now, I think I'm doing the best work I've ever done.

AB: Did someone actually forget to pick you up recently or is that just a general anecdote?

LA: That's just a general thing. They either forget or they're late or they're in the wrong part of the airport. Comedy clubs sometimes just send Karen who orders the fruit, and it's not the same thing.

AB: But she might have fruit with her, so you've got that.

LA: That's a good part [Laughs]. I'll never use that example again, because I don't want someone to be funnier than me. No, I'm just kidding you. I'm impressed you came up with it. I'm going to use it in my act, so thank you. Here's how you make that joke… So I'm in a bad mood because the comedy club usually sends a driver, but they thought they would save money and send Karen who buys the fruit. Karen finally gets there, and I say "Where have you been?" "Oh, I was cutting fruit. Here, I brought you some!" "Oh, okay then." Something like that. Maybe it would be better if she orders the desserts, but people might see that coming, but fruit they wouldn't see coming. That's how jokes are written, just like what we just did.

AB: You have The Louie Anderson Podcast where you talk with other comedians. Do you get a lot of jokes from that?

LA: No, my podcast is more about the comedian's journey. I want to know the journey they took to get where they are and I'm trying to help other comics who are starting out get an idea of what they're in for. Mostly, I just want to know how they got to where they are, because that's the most important part of life: the journey. The rest is fairly disappointing. I love being who I am, but you can only get so many fruit trays.