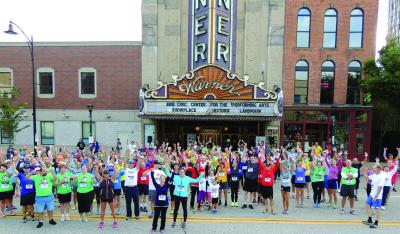 For all his virtues, Ludwig Van Beethoven was never known as much of an athlete. We can infer from portraits that his waistcoats and pantaloons were impeccably fitted, but without any surviving fitness logs or mirror selfies, there's no telling if he even lifted. That's okay, though, because when it came to music, he more than carried his weight, running circles around most of his contemporaries. His career, without question, definitely worked out.

That career made serious gains with Symphony No. 5 in C Minor, otherwise known as the "Symphony of Destiny" or the "Victory Symphony" (from World War II onward).  From its ominous and urgent opening motif to its triumphant finish, Beethoven's Fifth is a musical journey from the gloomy depths to the glorious heavens. Critics were effusive in their praise, including E.T.A. Hoffman, who wrote this in 1813: "How this wonderful composition, in a climax that climbs on and on, leads the listener imperiously forward into the spirit world of the infinite!"

This year, the road to the spirit world of the infinite goes through Perry Square. The Erie Philharmonic invites all able-bodied men, women, and children to participate in the Beat Beethoven 5K run (or 1-mile walk). Not coincidentally, the run will be conducted in tandem with the Fifth Symphony, beginning on the downbeat. Runners will predominantly follow West Sixth Street to Cascade, then loop back around over West 10th Street.  Those who finish before the applause will receive a free concert ticket. Standers-by more than welcome to choose from an array of vendors, food trucks, and activities as the music plays.

To the unseasoned runner, competing in any race may seem like the gateway to unending pain and sorrow, but take solace — a typical performance of Symphony No. 5 finishes in between 31 and 34 minutes (not bad for a 210-year-old). With a bit of conditioning and proper footwear (running shoes are much easier to find now than in the early 1800s), you should be able to make the curtain call without a hitch. Beethoven will never hear you coming. — Matt Swanseger

by Katelyn Kruszewski7 hours ago
The theatre and community arts center hosts a free two-day event of theatre, music, poetry, and more

Reptiles Take Over in a Scale-tastic Event