Mad Max: Fury Road Goes All in for Action Fans

No character better exemplifies the irresistible energy of Mad Max: Fury Road than the Doof Warrior. 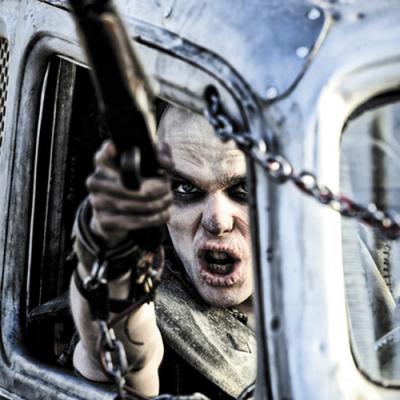 No character better exemplifies the irresistible energy of Mad Max: Fury Road than the Doof Warrior.

The Doof Warrior is a psychopath in a red leotard and a skull mask who is harnessed to the top of a souped-up mega-truck, where he plays sludge-metal licks on a guitar that also doubles as a flamethrower. He is deliberately and gleefully ridiculous, the perfect personification of a movie that knows exactly what its audience wants – and delivers it with astonishing finesse.

Fury Road follows a recent trend of no-nonsense cinematic ass-kickers that opt for focused, innovative spectacles instead of pointless subplots and digressions (see also: Snowpiercer, The Descent, and The Raid: Redemption). Within about fifteen minutes, you'll be treated to a single, extensive car chase that rarely slows down throughout the film's 120 minutes. The bare-bones plot concerns sex trafficking, adding a surprisingly feminist undertone to a film that could have easily felt like an episode of WWE SummerSlam.

This subplot also allows Charlize Theron to chew some serious scenery as Furiosa, the avenging angel with a shaved head determined to protect several young women from a lecherous warlord. She easily outperforms Tom Hardy's serviceable Max, which prompted some angry young men on the Internet to complain that Fury Road isn't really a Mad Max movie at all. Whatever. They can take a whaaaambulance back to Thunderdome.

Do yourself a favor and drop by the Erie Art Museum on Sept. 2 to experience a film that is equal parts spaghetti western, roller coaster ride, and Black Sabbath concert. Mad Max: Fury Road is apocalyptic sci-fi action at its very best. – Dan Schank