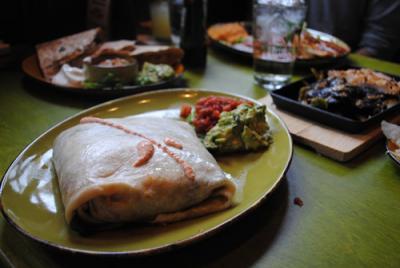 If there's one thing Reader Eater editors can agree on, it's our love of Mexican cuisine. If there's something else, it's our appreciation of a solid vegetarian-friendly restaurant.

So when we noticed the slow Pittsburgh invasion of Erie by way of sandwiches with fries on them and burritos with names like "Angry Hippie," we knew we had to head up the Millcreek Mall to check out what was happening. That's how we came to get a taste of the fresh, funky style of the new Mad Mex.

Executive Chef Bill Fuller's brought his distinct Cal-Mex (yes, different than the Tex-Mex most Americans just call "Mexican" food) brand of cuisine to Erie from its robust roots in Pittsburgh with branches and leaves stretching as far as Philly and Columbus, Ohio – and just because it's a restaurant located in a mall doesn't mean it's bland food-court food. In fact, it's far from it.

Take notable appetizer Pennsyltucky Fried Tofu. Funky in nature – after all, it's bite-size hunks of mashed soy beans tossed in soy sauce, peanuts, sesame seeds, and cilantro served with fresh bean sprouts – PFT jumps off of the menu, smacks you in the taste buds, and warns you that this is not something commonplace that you're bound to see many other places.

Then there's the Angry Hippie Burrito – a gnarly good mash-up of thick cut, grilled Portobello and piquant spinach that ain't your grandmama's canned stuff and that'll  remind you that leafy greens really can be fun, rounded out with pico de gallo, black beans, and melty Monterey Jack cheese. It's angry in all the right places and fun and friendly just like your favorite hippie friend who's always happy to see you.

Noticing a vegetarian-friendly theme, you say? There's that Cal in the mix, a West Coast approach to food that keeps it fresh and fun without weighing it down and sacrificing flavor.

Want to take it to the extreme? Many dishes come with the option to go full-frontal vegan by swapping things like the cheese for Diaya shreds satiate even the most health-conscious consumers out there.

But fear not, Carnivores – there's the other extreme, and eating meat doesn't have to come with a side of guilt.

If things like pork braised in beer, garlic, and ancho chili all snug in a wheat tortilla with roasted green chilis are more your thing, look no further than the Carnitas Quesadilla – a meatlover's dream served up with a side of slaw, pico, and Jack cheese.

But that's just an iota of the menu. There's an entire array of enchiladas and tacos. And those aforementioned burrito and quesadilla – they both have a lot of friends taking up good real estate beside them on the menu.

The common thread? That Mex – big, bold flavors dished out on grande plates, all to be washed down by shots of tequila, pints of craft beer, or glasses of fresh margaritas – which tells you that this is a place to unwind, gather friends, laugh, sweat, and be merry, because life's too short to not be funky fresh in a Cal-Mex kinda way and enjoy the food that embodies that philosophy.

The Reader Eater can be reached at ReaderEater@ErieReader.com