Magic awaits you at the Erie Playhouse with Cinderella

The Playhouse has created a magical production of Cinderella sure to be fun for the whole family. 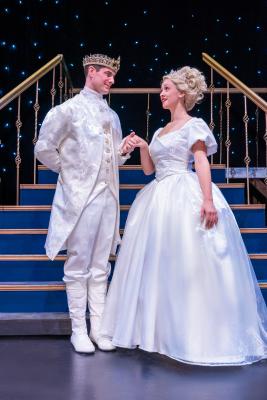 Before I begin this review I have a confession to make, I am a theatre kid. Even before I was a theater kid, I was a theater kid. I remember nearly wearing out our copy of the VHS (Yes, VHS) copy of the 1965 production of Cinderella. So it has a special place in my heart. Cinderella is a show that is truly a rite of passage for many of us that chose to partake in theater at any level. Not only was there a 1965 TV production, but also a 1957 and 1997 production, with the title roles being occupied by Julie Andrews and Brandy respectively. With all that history the Erie Playhouse has a great deal to take on when they opened their production of Rodgers and Hammerstein's Cinderella. The cast, crew, and production staff was more than up to the challenge.

With so much history I'm glad the Playhouse decided not to just do the original Rodgers and Hammerstein production, but to bring to Erie the revised production with a new book by Douglas Carter Beane. We still have all the classic songs, ("In my Own Little Corner," "The Prince is Giving a Ball," "Ten Minutes Ago") but the characters are a bit more fleshed out. The basic story is still the same, a young woman named Ella – who's father has passed – is forced to slave away for a cruel stepmother and her two stepsisters. She meets a young Prince who is throwing a ball, and young Ella goe through various trials and tribulations to get to the ball and meet the Prince.

The new version gives us a bit more depth with the characters. The young Prince Topher, (Played with wonderful earnestness, and a truly royal singing voice by Richard J. Kress) is no longer just a trophy for Ella to win. He is now a young man with the heavy burden of someone who is about to rule a kingdom but doesn't know who he is. Ella's stepmother Madame (Played by Shari Gould) and stepsisters Gabrielle and Charlotte (Megan Kibler and Katie Cecchetti) are also no longer two-dimensional but fully fleshed out with more back story. Charlotte in particular with her added love interest of revolutionary fire-brand Jean-Michel (Chris Hinchman). Colleen Prittie plays the mysterious Marie, who has more than a little magic up her sleeve and brings the house down with the song "Impossible." Richard Davis does quadruple duty as Director, Choreographer, Co-Costumer designer, and taking on the role of the Prince's uptight advisor Sebastian. Mr. Davis taking on all of this is not only a testament to him, but to the many people work with him to make such a production possible. The ensemble's work was really very enjoyable, full of the energy needed for just such a show.

The new version gives them a bit more to do than the original, there is some really great dance and vocal work by all those involved. The chase scene in act two has some really great work. In the end however the production really in many ways comes down to Ella, dubbed Cinderella for the soot that covers her. From the very first note she sings we fall in love with Natalee Junker as Cinderella and never look back. She encapsulates everything the part should be, kind, honest, but with a new determination. Cinderella is far more the Topher's equal in this production she just needs to break the chains that society has put on her to prove it.

A successful production of Cinderella, like the one at the Playhouse doesn't just happen. Erie is fortunate to have such talented staff and volunteers to bring something this to life. Ryan Ingram's costumes and Sam Brady's lights are particularly important with many of the magical moments in the show that I won't give away, but that brings joy to those young and young at heart. Andrew Rainbow deftly leads a fantastic Orchestra and Pit Singers that traverse this classic work with great expertise.

The Playhouse has created a magical production of Cinderella sure to be fun for the whole family. This time of year is so often filled with stress, conflict, and sadness. Put down the phone, and go see this show with the ones you love. It's a great way for both children and adults who have never experienced live theater a great way to start. In the end, all of our lives strike midnight and our magic is gone. I for one, however, believe our collective experiences live on, with theater being one such one. Don't miss this opportunity, you'll find it will far outlive other gifts.