Magic Returns with Into the Woods

The Erie Playhouse presents an outdoor production of the Sondheim classic 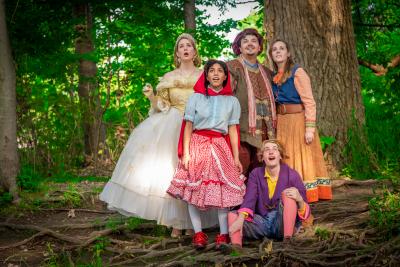 As the world begins to return to some semblance of its previous self, we are also rediscovering what makes life worth living. While binging shows on any number of streaming services is great, there is much more life in the live theater experience. It's an act of creation, humanity at its best, working together to create something to both teach and entertain. The collective nature of watching a work unfold with other people, having the actors feed off the energy of the audience and vice versa, is an experience that technology just can't replicate. Whether you're after that experience again or for the first time, there is no better chance than the upcoming production of Into the Woods at the Erie Playhouse.

Cinderella, Rapunzel, and Jack (and his beanstalk) are not just characters that have been appropriated by Disney. They and many, many more — mostly from the works of the Brothers Grimm — have ingrained themselves in Western culture so thoroughly that the idea of them being used in a musical is expected. How long that musical has endured, however, may surprise.

In 1986 Into the Woods, by acclaimed composer Stephen Sondheim (with book by James Lapine) premiered in San Diego, and went on to Broadway, numerous awards, film adaptations, and enough productions at every level of theater to fill a giant's treasure hold ten times over. Despite being a staple, it's always worth seeing. Rousing numbers like "Giants in the Sky" give way to beautifully haunting ones like "No More." The audience follows various well-known (and not-so-well-known) fantastical characters trying to obtain their "happily ever after." When they find it, will it be what they truly wanted? The lessons and struggles that come with it are what makes this incarnation a cut above just another rehash of these much-retold stories.

The Playhouse will also go a cut above just a traditional retelling of this famous musical by performing it outdoors — allowing people to gather safely as we slowly come out of the pandemic. Audiences and the Playhouse will venture out of Downtown Erie to the lush greenery of Wayside Presbyterian Church. Make sure to bring your own folding chairs, and note that no alcohol will be permitted. With a cast of 24 actors consisting of Erie-area theater veterans as well as several new faces, director Domenic Del Greco and assistant director Kate Neubert-Lechner are sure to make your summer a bit more magical. Don't miss your chance to truly be taken away — if only for a moment — Into the Woods.

Explore The Haunting of Hill House with All An Act Theater

by Ally Kutz3/18/2022, 1:30 PM
Impassioned anxiety overflows from Oregon to Reading to Erie