Make it a 'White' X-mas at Burny White Tribute Show 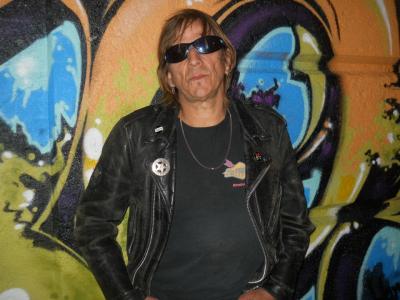 With his family set to move into a new home, Burny White was so excited and proud. Yet in an instant, the course of his and his family's lives would change when he accidentally plummeted head-first down his cellar stairs and sustained terrible head trauma that would require brain surgery.

With his wife Lisamarie caring for him during this painful, tragic time and so many costs accruing, it is no surprise that the Erie community is rallying behind one of its original punk rockers as he progresses on the journey toward recovery.

"Burny was part of the first wave of garage/punk in the mid to late '70s here in Erie. He also played with members of the Dead Boys and New York Dolls in NYC," said Carlos Rivera, band member in Mala Sangre and The Trotts and event organizer. " punk band in Erie was the X-Whites …to me, their originals are Erie classics — 'Bombers,' 'Rebel Rocker,' and 'Motorcar' are some of my faves."

White and his family at the epicenter of the X-White X-mas tribute show, which is being held at Scotty's Martini Lounge and will feature 11 acts, including My Father's Garage, Quarenteen'd, Hand of Thieves, Rub the Buddha and Brit Soule (plus more). All of the proceeds from this show, where acts will play their own original sets, as well as tributes to White's music throughout the years, will go directly to his family.

White is indeed in his new home currently, and while is a long path of healing, Rivera knows that news of this fundraiser has already made an impact on the man it honors.

Said Rivera, "Burny is aware of the event…it brought tears to his eyes. He's grateful for what we are doing for him." — Cara Suppa