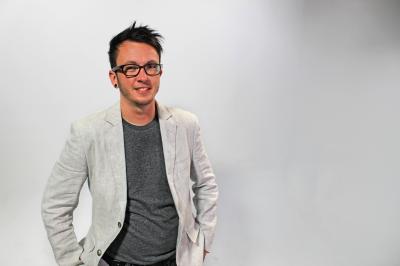 Tyler James Titus is one of five people on the ballot for the board of Erie's City School Directors. On Tuesday, Nov. 8, voters can select up to four candidates. If their name is one of the four top choices, history will be made. They will be the first elected official in the state of Pennsylvania who is openly transgender. While Pennsylvania does boast one of the nation's top trans officials, Dr. Rachel Levine, our state's Physician General, she was appointed to the cabinet by Governor Tom Wolf.

In 2014, Titus came out as trans, and their life has been on a positive trajectory ever since. In May, Titus staged a successful write-in campaign to be on November's ballot. In June, they were selected for The Erie Reader's 2017 40 Under 40 class, and has since been featured in news outlets, most notably The Daily Beast.

An energetic father of two boys, aged 9 and 4, they're personally invested in the Erie School District. We were able to sit down with the charismatic candidate to get their take on things.

Nick Warren: Let's start with how you got here. In regard to your write-in campaign, how did the hurdles of May's primary get you to this point on the ballot?

Tyler Titus: What happened in May was a testament to my commitment. I accept accountability for filing one form in the wrong building. I filed my paperwork in the county courthouse, making it a public document available to all interested parties; however, what I neglected to do was file an additional form at the School District building. At the end of the day, several of the candidates did not comply with this filing expectation and were essentially sued by a democratic voter within the city. Four candidates who were running for an unpaid political position stood and presented testimony that we were all told that we filed correctly. However, the responsibility was still on our shoulders, and all four democratic candidates were knocked off the democratic ballot for the May primary election.

I was not willing to back down from the fight for our community's children and teachers, so I launched a write-in campaign. I spent many evenings at local events sharing my platform and many hours knocking on voters' doors. I wanted to make sure that our community knew that it did not have to accept the current condition of our public schools and that they had an additional option: write my name on the ballot. And that's exactly what they did. I received enough support from Erie City voters that I won a spot back on the ballot for the general election.

NW: What have you learned so far being a parent in the school district, and what has your involvement been with the district so far?

TT: We have some phenomenal teachers and staff who are dedicated to providing for our students. I have learned that our students want to learn and are desperate for a safe space to discover their talents. I have learned that we as a community have neglected our schools and passed it on as someone else's problem to fix. I have been in our schools as a treatment provider for many years and I've been an advocate for the students, teachers, and parents. I've worked to alleviate some of the barriers that stood in the way of successful outcomes for students and teachers.

NW: How will you work with local and state government to try to curb our school's ongoing financial crisis?

TT: Erie has an enormous amount of dedicated humans trying to make it a successful and safe community. However, so many of these talented people are operating in isolation, almost like a million little islands with invisible "do not cross" tape wrapped around their edges. I have already started forging connections with county and city government in order to understand their systems and how those departments can support each other. I believe that Harrisburg has a responsibility to support our public schools; however, I do not think we can wait for them to rescue us. We have to come together as a city and ask, "what can we do to help our schools?" It is a responsibility of every individual within our city to support and advocate for our public schools. We have to change the dialogue from how the schools are failing our children to how are we as a community failing our schools.

NW: What would it mean to you to become the first openly trans elected official in Pennsylvania?

TT: When I was in high school I was bullied to the point of believing I was intrinsically flawed. I would fall asleep wishing that I wouldn't wake up, so that my family wouldn't have to face being shamed because of their "defective" child.

Becoming the first openly trans elected official means my community believes in my ability to be a voice and advocate for our children and teachers. It means that every moment of self-doubt I ever experienced and fought to eradicate was worth it.

Now here I am — a man who has learned how to love himself and believe in possibility. Society told me to believe I was not worth fighting for and now I know that every child deserves to have someone fighting for them. Becoming the first openly trans elected official means my community believes in my ability to be a voice and advocate for our children and teachers. It means that every moment of self-doubt I ever experienced and fought to eradicate was worth it. This election means that people are not defined by gender or orientation, but rather by the skills that they bring to the table.

And that is exactly how a candidate should be assessed.

NW: What effect did the Daily Beast article, and subsequent coverage, have on your campaign?

TT: [laughs] Outside of blowing my mind? I went from being a guy running for a local office to a guy making national headlines and potential state history. The article in the Daily Beast launched my campaign which brought about both positive and negative feedback. I have been approached by trans youth and parents of trans youth stating that I have given them hope that things are going to be okay. I have also been cyber-attacked by people who believe that being transgender is a choice, a sin, and that my access to children should be denied as I am a "perverted threat." However, I expected backlash and thankfully have already healed old wounds that relied on approval from others. I know why I am running and it doesn't have to do with being transgender.

NW: I hear stirrings that there's a documentary being made about you, is that true?

TT: It is true! I had the privilege of working with Laurence Mathieu-Leger, a Senior Producer from Bustle — formerly a film producer at The Guardian. The piece is on five trans/non-binary candidates who are currently running for elected political offices across the US. The piece is set to be released early November 2017.

NW: What about your professional background makes you feel you are a good choice for school board?

TT: At the age of 19, I started working for my county's child protective services as a case-aide. I would transport children who were adjudicated dependent [i.e. recipients of child welfare services upon a juvenile court ruling] and in foster care to visits with biological family members. I was exposed at an early age to systemic flaws within systems designed to help those in need. This experience, and others, propelled me into a social service career. I worked at the Erie County Office of Children and Youth for seven years, as a caseworker and eventually the training supervisor, before accepting the clinical therapist position at Harborcreek Youth Services three years ago. The past ten years have been dedicated to serving children and families here in Erie County.

I don't just read about the struggles of our community, I go into them with the families. I am at the dining room table, on the living room couches, in the classrooms, at the court hearings, and in my office as we figure out a way to get out of the darkness they are experiencing. I don't just make decisions for other people. I empower them so they can make their own.

Fighting for our children is not only what I know how to do; it is what I want to do. I serve on local nonprofit boards without compensation because I believe in creating a safe and thriving community for families, for my family.

NW: Lastly, how can voters get involved?

TT: Every person needs to ask themselves if they are okay with what they see happening in their community. If they aren't, then they need to run for office or get behind a candidate that they believe in. Every voter needs to know what is going on in local politics as this is what directly impacts their daily lives and ultimately determines the larger government around us. Local elections matter and we owe it to ourselves and our children to become invested. Ask questions, demand clarity and accountability, rally for your causes.

Titus is joined on the ballot by incumbents Angela Euell-McNair (herself a 40 Under 40 honoree in 2016) and Thomas Spagel, as well as realtor Tim Kuzma, and former teacher and coach Darlene Feeney — who was also struck from the primary ballot.

Nick Warren can be reached at nwarren@eriereader.com.

Note: This article was updated in 2021 to reflect Titus' they/them/theirs pronouns