by Nick Warren
View ProfileTwitterInstagramRSS Feed
April 24, 2019 at 9:45 AM 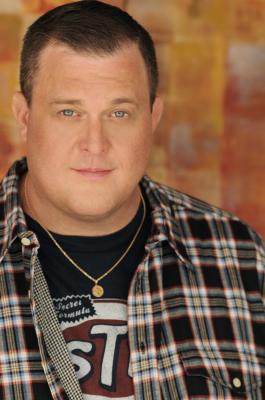 While millions of Americans know him best as Officer Mike Biggs on the hit TV show Mike & Molly, actor and stand-up comedian Billy Gardell has been making his rounds in the comedy scene for decades. We caught up with him right before he swings by Erie on May 3 for an evening at the Warner Theatre.

Nick Warren: Clearly, you've been doing this for so many years, and you're a very well-established comedian. That's how you grew up and that's what you know, is working the clubs, right?

Billy Gardell: I started out — obviously like every other comic — in the clubs. And you pray one day for a TV break, and I was lucky enough to have that in Mike & Molly, and that allowed me to get where I could play casinos and theaters and stuff like that, so I think to find that really funny joke you still need to go back to the club.

NW: So as someone who has basically toured everywhere, what are some of the places that you've been best received in America?

BG: You know, I've got a pretty good record, man. I came up in Florida, stand-up wise. I started in honky-tonks and biker bars and worked my way into clubs from there. And I did a lot of the South, and I did places that I'm not sure if I would have gone there as a patron, and I ended up being the entertainment. So, that puts a coat of leather on you. And then I moved north and did the Northeast, and then I did Chicago and did the Midwest, and then I finally moved to Los Angeles. And I drove to all the states from Illinois over to the East Coast — New York, Pennsylvania, Indiana. And what I learned was: If I write material that we all can identify with, that is true to me, then that will appeal wherever I'm at. And so what I found was that my common threads are: Don't take yourself too seriously, the fact that I'm falling short when it comes to technology and memory — I just don't have either [laughs] — being a dad, and being married for 18 years. And it took me a while to find my voice, but once I found that, I knew what I was writing for.

NW: That seems to be one of the major focuses of your material lately — married life, et cetera.

BG: I'm in this really fun place now with my stand-up because my son is now 16 — he's always at his buddy's on the weekends and stuff so now, me and my wife are playing one-on-one again. Now it's about being a veteran couple as opposed to being a rookie couple, so it's made a nice transition.

NW: Yeah, being married for that long — some people say* that being a comedian, that the years you've been doing it, that's how old you are — do you find that's almost true for marriage, too?

BG: I've never heard that one, that's pretty good. So I guess I just turned 30 [laughs].

NW: That's pretty good, you're matured by then — mostly! [laughs] So in Erie, it's kind of an interesting situation, we're lucky enough to have JR's — which is great — and have a lot of great people coming through the Warner, like yourself, and we're also always trying to start our own little underground fledgling scene. Especially from your early days, what's some advice you might have for how to start out, as a group?

BG: Well you know man, at first I would say: Don't concern yourself with what anyone else is doing in a negative way. In other words, be supportive of the other guys around you because if we all sounded the same and we were all the coolest guy, then it wouldn't be very interesting. So comedy to me has always been like jazz. Everybody has a different horn, everybody sounds different. And encourage each other, because that's how we did it. Our open mic night was me, Darrell Hammond, Larry the Cable Guy, Carrot Top, Wayne Brady. I mean that's a pretty big set sitting around, but at the time, we were just comics and we were just sitting around Denny's trying to figure how the hell to make a dollar at this.

BG: Right! And he was ahead of us, he was a middle act. Tom Rhodes was a middle act, he was another influential guy for us. And you know, man we just kept going. Me and Darrell Hammond used to go to open mic night together with a couple of other friends and it seemed like when you ran like that, you kind of encouraged each other. What we did was we made friends with the comics who were down in St. Pete[rsburg, Fla.], which was like Jim Bruer and a few other cats down there. And then they would recommend us to their home club and we would recommend them to our home club in Orlando and we would get gigs rotating that way. And then, as you said, the underground scenes were vital. Monday, Tuesday, and Wednesday — there was a different bar that we started a comedy night at each night, and those were great workout rooms. Because if you can go into a little corner bar and lay it down in front of eight or nine people and still make people laugh, that gives you a sharpness that's going to pay off later.

NW: You touched on it, but with Mike & Molly, we're a few years out of that now, but how has that impacted your life? I can only imagine.

BG: Oh, it changed my life in so many ways. Obviously, financially it helped and made us very stable. We were able to get a house, and I'm able to send my son to school, and college, and I'm excited about that. But I'm still from Pittsburgh, so it's like, you get in if you get in, if not, you go to a community college and then you transfer over. So there are things like that, we're lucky enough to be able to take care of the bills, and have savings — but that's all because of my wife — the money I made from Mike & Molly I gave to her to deal with, because if I'd have gone through that, I'd have ended up with a jet ski and a hot air balloon.

NW: [laughs] At least you can travel. So as far as current projects, how is Young Sheldon going for you?

BG: Young Sheldon has been super fun, I get to guest star on that once in a while, and that cast has been lovely. And, I'm shooting a pilot actually this week with Chuck Lorre called Bob u's Abishola. Bob, heart emoji, "s," Abishola. So this is a new one, it's a sweet story. It's a guy who owns a compression sock factory in Detroit, and he has a heart attack because of the business and his family and he wakes up in the hospital and there's a nurse there, she's from Nigeria, and he's a little taken by her. And she doesn't have any time for that; they're very different, but there's something about her. The first part of the series is just about him trying to get her to give him a chance, and it's very sweet and very funny.

NW: I wonder if that's one of the first shows with an emoji in the title.

BG: I don't know man, we gotta be, right? Yeah, I don't think anybody's done that yet, that's kind of cool.

NW: I like that. And obviously, Chuck Lorre has a great track record [laughs].

BG: It's like playing for the Yankees, man. I'm honored that he wanted to do something with me again. It's like one of those great coaches. Like [Bill] Parcells, or Chuck Noll, I think when somebody like that believes in you, you believe in yourself a little bit more, you know.

BG: Yeah, we're shooting that this week. So we'll know whether we launch or not in May. I'm very excited.

NW: Aside from that, anything else in the works?

BG: Let's see. I've got a little bit of touring coming up. Like I said I'm coming to the Warner May 3, and I'm looking forward to that. Then I'm going to go down to The Mountaineer [in New Cumberland, W. Va.], then I've got a couple of corporate events, and then I'm going to come back here and try to take off about 40 more pounds. Gotta get these sugar numbers under control. That's what me and Eric [Griffin, on his podcast] were laughing about, we just love to eat, it's too dangerous!

BG: You know, some people don't have the food thing, but boy that's been my demon for a long time. So I'm trying to face it down because I don't want to wind up riding around on one of them Zappys with an orange pole behind me. I haven't had any sugar or carbs in about a month and I'm just angry. It just makes you mad. You look great, but you're just mad.

NW: [laughs] And I wish you luck with that. And yeah, you quit drinking twelve years ago?

NW: And you said you were a Pittsburgh guy, do people ever say you have a Pittsburgh accent? Because when listening to you, I thought "there's a little bit of a bite there, where is that from?"

BG: Yeah, when I get back home, it comes out, I'll be walking around like "yinz gonna get up 'air in about an 'our?" It comes right out. And every now and then when I come back home and I'll be doing some work around the set I'll say "ahrn, dahn, or hahs**." And they'll go "um, could you pronounce that a little differently? [laughs]. If I stay in Pittsburgh too long, I'll need subtitles.

NW: [laughs] It all makes sense now. Thank you.

**Translation: "iron, down, or house"