Mamma Mia, the magical and beloved musical, will be performed at the Warner Theatre on Jan. 12.

by Tracy Geibel
View ProfileFacebookTwitterRSS Feed
January 4, 2017 at 9:30 AM 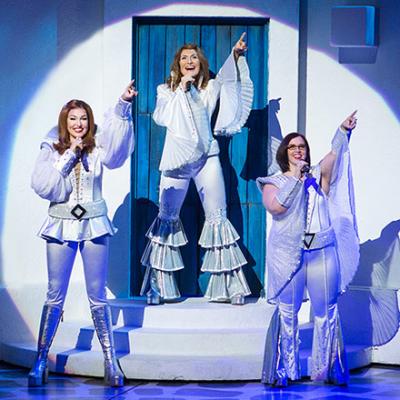 Mamma Mia, the magical and beloved musical, will be performed at the Warner Theatre on Jan. 12.

The musical, which was first performed in March 1999 in London, England, tells a memorable tale about a bride-to-be, her single mother, and the three men who might be her father.

More than 60 million people in 440 major cities have seen Mamma Mia, and it consistently brings in record-breaking audiences. In 2015, it became the eighth longest-running show on Broadway. In Moscow, where Mamma Mia was the first show to play every day of the week, it was the city's bestselling musical. In Germany, it was the first major musical to play in three cities concurrently.

Written by Catherine Johnson and produced by Judy Craymer, the musical is about a young woman named Sophie, who is preparing for her dream wedding. She just wants her father to walk her down the aisle, but before that can happen, she needs to find him. So she invites all three of the men who could be her father to the wedding.

"We really had no idea how it was going to be received," Craymer said, according to Mamma Mia's website. "The audience went wild. They were literally out of their seats and singing and dancing in the aisles – and they still are."

What could be disastrous turns out to be hilarious. The audience will find themselves falling in love with the characters and singing along to the infectiously catchy music, which includes songs by ABBA like "The Name of the Game," "The Winner Takes it All," "Gimme! Gimme! Gimme!" "Knowing Me Knowing You" and, of course, "Mamma Mia." – Tracy Geibel