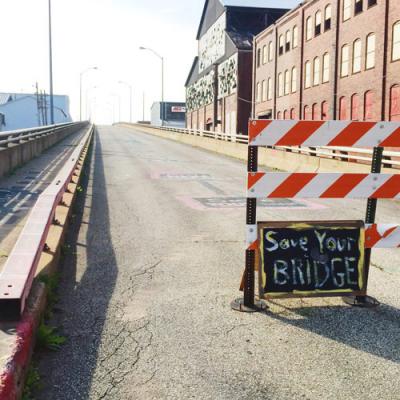 The City of Erie has pushed for the demolition of the McBride Viaduct (a.k.a. the East Ave. Bridge) for several years now, citing various reasons. Unfortunately for the pedestrians who depend upon the viaduct for safe crossing of Erie's railroad mainline, the original assessment considering repair of the structure did not include an option to preserve it as a pedestrian walkway. The folks who decided to tear down this piece of Erie history were not truly considering the human factor served here. In the case to save the McBride Viaduct, I have personally experienced an uncannily parallel situation involving another bridge, in another state.

Several years ago I found myself staying with friends in the area of Marietta, Ohio. Marietta is a lovely city located on the southernmost border of the state of Ohio, at the confluence of the Ohio and Muskingum Rivers. History buffs recognize Marietta as a former western border of America's Northwest Territory. Marietta and the surrounding area offer a plethora of historical sites, and also a similar "east side vs. west side of town" attitude as exists in Erie.

The Muskingum River bisects Marietta. The settlement was originally founded on the east side of the river; on the west side was a military outpost, Fort Harmar, protecting the river's physical boundary and buffer between Marietta and the frontier to the west. Later on, the west side became the location of Marietta's railroad yards, as well as home to a little community of housing and businesses supporting the river transportation and fishing industries of the town. Residents considered the west side to be rougher than the east side, which was not scourged by dirty, noisy railroad yards and did not have as many bars and brothels as the west side. Eventually the railroad yard relocated and the brothels shut down, yet the west side was still considered the "poor side" of town. The attitude seemed to project onto the residents; the properties were more unkempt and dilapidated than on the east side. Broken bottles and litter were found in abundance along the streets of the west side, and crime seemed at home there.

The most commonly used pedestrian connection between the east and west sides was the old railroad/pedestrian walkway bridge, abandoned by the C&O Railroad in 1968, after the trains were rerouted out of the downtown district. Abandonment caused the bridge to become a point of concern for the city, which looked to demolish it. After all, another bridge was available to cross the Muskingum at Putnam Street, about two blocks upriver. That newer bridge accommodated both vehicle and pedestrian traffic. Since the railroad bridge was a swing bridge, the swing span was opened by the railroad to prevent further pedestrian traffic, in 1976. Residents and tourists then had to use the Putnam Street bridge if they wished to cross the Muskingum. Those without motor vehicles who lived on one side of the river but worked on the other side, had to walk or bike a minimum of a half mile out of their way to reach their destinations.

The difference in traversing the two bridges is astounding. Whereas crossing the historic bridge offers an experience of peace and reflection, crossing the Putnam bridge is noisy, dirty, and potentially hazardous for pedestrians. It was not designed primarily for pedestrians. Dust and debris is thrown by passing motor vehicles, creating an environment for injury.

With this in mind, a group of visionary citizens joined together and acquired the abandoned bridge and the area of the former rail yards in 1984, under agreement of community care and restoration of the bridge and walkway, and transformation of the acreage into a park in the atmosphere of the railroad era. The area between the Ohio River and Putnam Street is known as Harmar Village. The citizens' group became the Historic Harmar Bridge Company. During its 30-plus years in existence, the group has brought life and dignity back to the formerly blighted west side, to the point where it's been included in the top ten tourist attractions of Ohio.

The transformation was miraculous, but it didn't happen overnight. Business owners and other members of the Bridge Company walked the area daily, picking up trash, litter, and other detritus. Each day there would be more to pick up, but it was picked up. Eventually good habits caught on. School kids from the neighborhood elementary school were encouraged to take ownership of their neighborhood, and they began to take pride in helping. New businesses slowly moved in. Local trade unions stepped up, using the bridge as a training venue for welders, fitters, and miscellaneous construction projects. The CSX railroad saw purpose and motivation in the project, and donated an old boxcar; Goodyear donated several older passenger cars, which have since housed businesses and social events. Besides local residents seeking safe and pleasant crossing of the river, tourists thronged to cross our country's oldest operating railroad swing bridge.

Thirty years later, Harmar Village has pride. Businesses and entertainment sites have thrived. Though still an impoverished area, the residents have spruced up houses and planted flowers in their yards, assisted to a degree by small community incentive grants. At least four specialized historical museums exist in the Harmar area; a new fishing and boat dock has been dedicated, and a beautiful Community Center has opened to serve both the youth and the elder populations of the neighborhood. The City of Marietta operates a tourist trolley bus as part of their public transportation, and Harmar Village is included in its itinerary.

Good things do take time and investment, but the value attained is priceless. The Historic Harmar Bridge Company, a 501(c)3 nonprofit, helps to maintain the standards of the neighborhood, and yes, it still involves litter pickup and property improvement. That part will always exist, everywhere humanity steps. But the big issue has been the development of the sense of community. People whose very existence had been on "the poor side of town" have been given opportunities to improve, and those opportunities have been welcomed and built upon. What once had little, now has hope. Residents now come together for an annual neighborhood picnic, in addition to the annual Harmar Days festival during the last weekend of July, which provides much of the funding for operations expenses of the association, which is and always has been an all volunteer venture.

Those of us who wish to save the McBride Viaduct have similar vision as the Harmar group, but our primary focus is on safety for pedestrians and bicyclists. At this point, the estimated cost for demolition of the structure equals the cost of effectively repairing it for pedestrian use. Our volunteer group, Erie CPR (Connect Plus Respect) is prepared to help grow the project through leadership, guidance, and financial grant writing. I have witnessed the fruition of community vision in Marietta. How about it, Erie?

Nancy E. Wagner is the Secretary and PR Committee Member of Erie CPR (Connect Plus Respect). She can be reached at eriecprnew@gmail.com.