Matty and the Pickles // LIVE 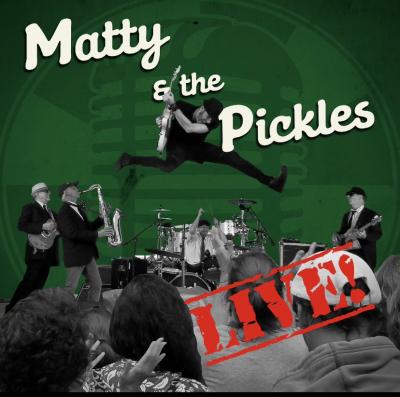 Anyone who has seen Matt Boland play knows that he leaves his heart on the stage. With this live recording, you get all of that energy encapsulated in a feverish 10-song set over 47 minutes. If you're charting the evolution of Matty, you'll note that the band has dropped the "B" and the "Dirty" from their name. The band is all sonic bombast, an old-school retro rhythm and blues revue of the finest order. Featuring seasoned vets like David VanAmburg, Paul Sontheimer, Digg It Dave, and Phil Papotnik, the band doesn't miss a note on this live record. Recorded by Russ Illing at 98 Beat Productions hear their takes on classic favorites like "Johnny B. Goode," "That'll Be the Day," and "Stand by Me" as the band puts its stamp on hits from the '50s and '60s. It's rockabilly in its true and honest form, simultaneously raw and perfected. Boland is doing what he's best at, leading a band with the fervor of a dyed-in-the-wool entertainer. The band will perform at a special album release at the Erie Art Museum on Thursday, Sept. 2, and at the Albion Fair on Friday, Sept. 17. — Nick Warren