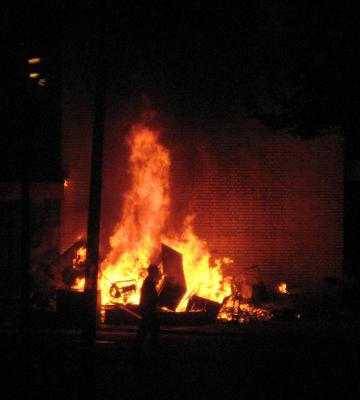 Mt. Airy, N.C.  - The town of Mayberry, N.C., is ablaze this evening as reports of arson, looting, and shootings continue to stream in.

Reports from the scene describe horrific levels of lawlessness and violence not seen in the United States since the Los Angeles riots of 1992. At this time, reports of death or injury from Mayberry are still sketchy, but totals are expected to surpass L.A.'s 53 dead and 2,000 injured.

The spark that initially ignited this long-simmering cauldron of crime appears to be the sudden death of long-serving and well-liked Sheriff Andy Taylor early this morning. Taylor, who notably refused to carry a firearm, was known across the nation for his ability to solve most problems in Mayberry with his fatherly, compassionate style, usually in under 30 minutes.

Violence is expected to continue through the night; Mayberry's Deputy Sheriff Bernard Fife was unavailable for comment. We'll continue to monitor the situation and update as warranted. In the meantime, pray for Mayberry.