Broadway performer, playwright, and Juilliard grad Michael Milligan takes to the stage to deliver a performance portraying the struggles of self-reliance versus healthcare. 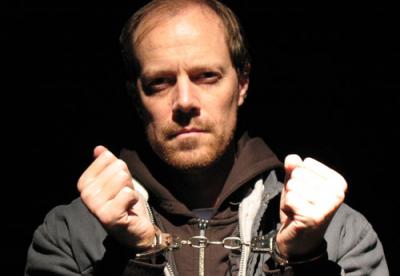 Health care is a sore subject in the U.S. Sensible debates about the topic are often lost in a sea of bureaucratic jargon, corporate euphemisms, and cable-news-fueled misinformation. Less sensible debates can lead to shouting matches about death panels and elopements to Canada.

In his one-man theatrical performance, Mercy Killers, actor and playwright Michael Milligan approaches the issue from an individual man's perspective. The play tells the story of Joe, a conservative Tea Partier whose belief in free markets and self-reliance is called into question when his wife is diagnosed with breast cancer.

Joe's story comes in the form of a police interrogation following the mysterious death of his ill wife. As an auto mechanic and small-business owner, he has been unable – as we quickly learn – to keep up with his wife's escalating hospital bills, and as physical and economic conditions worsen, the couple's story becomes more and more desperate. Joe's monologue documents the ethical, psychological, and social costs of our healthcare system – in addition to the financial ones.

Milligan, a Juilliard graduate and Broadway performer, is unapologetic in his call for a more community-oriented, universal approach to our healthcare system. With its focus on an intimate family struggle, Mercy Killers avoids the partisan posturing that often attends discussions of this touchy subject. Instead, it puts a human face on the issue and asks us, for once, to spend an evening listening instead of reacting.