Mick Foley Drops Back Into Jr's 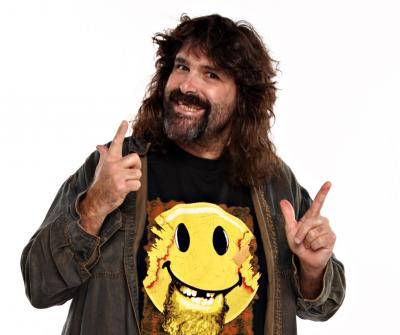 He's been called Cactus Jack, Mankind, and Dude Love. Under all those pseudonyms is Michael "Mick" Foley — and you can see him at Jr's Last Laugh Comedy Club. Foley spent most of his career working for every professional wrestling outfit you could think of, from the ECW to the (former) WWF (including doing some work in Japan). Now he's spending the latter part of his career as a critically acclaimed, bestselling author and spoken word artist. That's right, the man behind the mentally deranged loner Mankind, who stuffs smelly gym socks into his opponent's mouths, has written four children's fiction books, two contemporary fiction books, and five memoirs. Two of these memoirs have been on the New York Times bestseller list.

Mick Foley is currently on the road promoting his "The Nice Day Tour", which sees him celebrating the 20th anniversary of his first autobiographical novel, Have a Nice Day!: A Tale of Blood and Sweatsocks. In 1999, Foley decided to write the book himself, turning down the use of a ghostwriter. However, this isn't a book tour so much as it is a chance to hear tales from "the Hardcore Legend" himself. Foley is no stranger to the comedy stage — he started performing at comedy clubs in 2010 (including a January 2014 weekend at JRs to a packed house), telling stories from on the ring and on the road. His live performances blend humor, wrestling history, and fan interaction. With a delivery as honed as any seasoned comic, Foley talks about his upbringing and how he rose to wrestling stardom, where he won the WWF (now the WWE) Championship in 1998 from The Rock — you know, the guy from the Jumanji movies.

Throughout his career, Foley has been known for taking some of the hardest hits (sometimes from a bat wrapped in barbed wire) and definitely some of the greatest bumps. His most infamous bump can be seen on the Internet and is still talked about amongst wrestling fans everywhere. In a match with The Undertaker dubbed "Hell in the Cell," Foley didn't just drop from 20 feet above the ring once, but twice. Watching the video, one cannot believe that anyone could survive this. It's considered one of the most famous matches in WWE history, and is usually a topic of discussion during Foley's set. It's the way he recreates these breathtaking moments with such fine detail that keeps the audience on the edge of their seats.