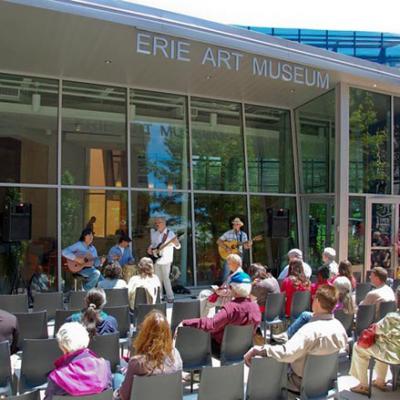 The series will include popular, returning favorites like Bass/Drum/Bass, The Breeze Band, and Erie Philharmonic's "Get Your Phil at Noon."

The series will include popular, returning favorites like Bass/Drum/Bass, The Breeze Band, and Erie Philharmonic's "Get Your Phil at Noon." New acts include he Mighty Sea – an alternative acoustic duo, and The Mountain Thyme Ramblers – traditional bluegrass with an Irish folk twist.

Stephen Trohoske, Stix Thompson, and Tony Grey of Bass/Drum/Bass will be the first to perform. When together, their combined musical knowledge is encyclopedic, as they craft endless, improvised jazz grooves.

Trohoske, an Erie native, grew up in a music-loving family, listening to various styles. He developed a devotion to blues, dub, post punk, and several other genres, influencing his "trademark sound." Trohoske has toured with the Foley Project, performed and recorded with numerous other artists, and worked with dance companies, writing a piece for a Toronto-based dance company in 2005.

Grey, from England, also grew up in a musical family, one which included his uncle John McLaughlin, a legendary guitarist. At age 18, Grey began playing bass after a near-fatal accident, which provided positivity during rehab. In addition to performing with other jazz artists, he spent more than four years touring with the pianist Hirome. In 2014, Grey released "Elevation" with a band that included McLaughlin.

The concerts are held from noon to 1:00 p.m. and are free and open to the public. Audiences can also visit the museum's galleries for free on Wednesdays from 11:00 a.m. to 5:00 p.m. – Tracy Geibel