The result is jarring, but the film is held up by the charming leads, Seth Rogan and Charlize Theron 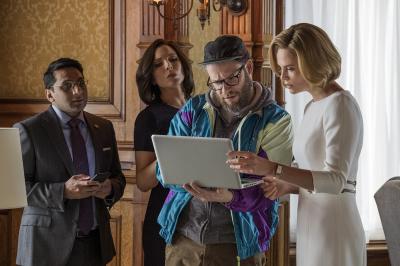 It seems that politics have permeated every facet of our lives at this point. Spend enough time among any group or activity and it's only a matter of time before discussions turn political. Before Jonathan Levine's (50/50, Warm Bodies) new film Long Shot was released, I would have joked that soon we'll see politics enter our harmless romantic comedies. That joke is now a reality because here's Long Shot, a romantic comedy that attempts to marry Seth Rogan's stoner humor with grim discussions about the political realities of our world. The result is jarring, but the film is held up by the charming leads.

The film concerns Charlotte Field (Charlize Theron), the Secretary of State who is tapped by the President to be his successor. During this time, she runs into an old childhood friend, recently unemployed journalist Fred Flarsky (Rogan), who she hires as her speechwriter. As they work together, the two begin to fall in love, much to the chagrin of her campaign managers who believe this may ruin her Presidential run.

The film makes a noble attempt to balance slacker comedy moments with moments of intense social and political issues, but the result can be disjointed. The film also has pacing issues and a fair amount of the jokes fall flat. However, Theron and Rogan have a chemistry that elevates the film above its flaws, and it can be an interesting look at a role reversal of the classic "overworked professional falling in love with assistant" trope. Long Shot isn't great, but its leads make it watchable. — Forest Taylor