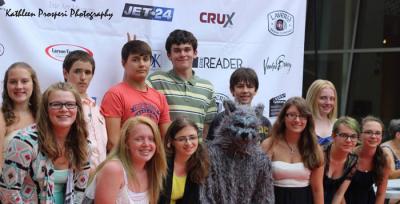 In Kane, Pennsylvania there are ten middle school students who will enter high school as accomplished documentary filmmakers. That's because, for the past three years, these students have produced and marketed a 45 minute documentary film on the 150 year history of their hometown.

The project was administered by Erie Arts and Culture and produced as part of Kane's sesquicentennial celebration. It brought together author P.J. Piccirillo and Erie filmmaker John C. Lyons with students from the Kane Area School District. Together the group produced the film, "150 Years of Kane: A Student Journey," which chronicles the students' exporation of their hometown and heritage.

"Working with the students was an amazing experience," Lyons says. "I was impressed at every turn by their skill and dedication to this massive task."

A second group of students took on the financial challenges of fundraising for and marketing the film.

The film premiered at FILM at the Erie Art Museum on July 2. The student producers were in attendance. They walked a red carpet and took glamour shots in front of the museum before the event.

During the post-film Q&A the students were asked if the project had changed the way they viewed their hometown. Most agreed it had.

Watching the film you get the sense that these students have, at once, a childs view of the world and a sophisticated sense of their place in it as a result of their work on this project.

If you want to check out the film there's still time. There is at least one more showing at the Kane Family Drive-In on July 29. The students will be there to sign autographs. More information about the film is available at kanedepot.org.