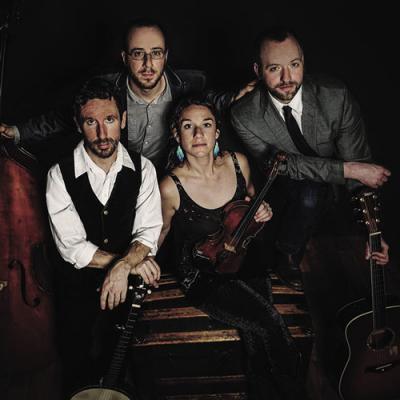 Over Christmas music yet? So are we, which is why it's pretty awesome that December will welcome plenty of great bands. One such band is Binghamton, N.Y.'s Driftwood, who will headline at the King's Rook Club on the 15th. The sonically fluid outfit hasn't been to Erie in around three years, bassist Joey Arcuri explained, so catch them while you can. The overall sound draws from many sources, marrying the power of punk rock, the heartfelt intensity of old-time Americana, and rock's companionable swing with bluegrass instrumentation. Three band members write the songs, which leads to an eclectic sound, but who's judging? At the upcoming gig, decide for yourself and enjoy relatively new material from the band, including selections from their latest LP, City Lights. The album's 10 songs were recorded in 10 days up in the Catskills, said Arcuri.

The overall sound draws from many sources, marrying the power of punk rock, the heartfelt intensity of old-time Americana, and rock's companionable swing with bluegrass instrumentation.

Harrisburg-based Rivers will be opening for Driftwood. The Pennsylvania outfit plays acoustic tunes with a bit of percussion, a bit of the old mournful violin and some upright bass. And if your ears don't need a break, join the Old Main upstairs to round out this late, loud and rocking night of Americana tunes. If you're into The Avett Brothers, Dawes, or The Band, then this group, hailing from Upstate New York, will be just the thing to provide the soundtrack for an extra drink or two and the excuse to then dance it off. And the next day, relive the show by putting together a playlist of tunes from the night to override any holiday-themed music bursting forth. Who needs Christmas songs anyway? — Miriam Lamey